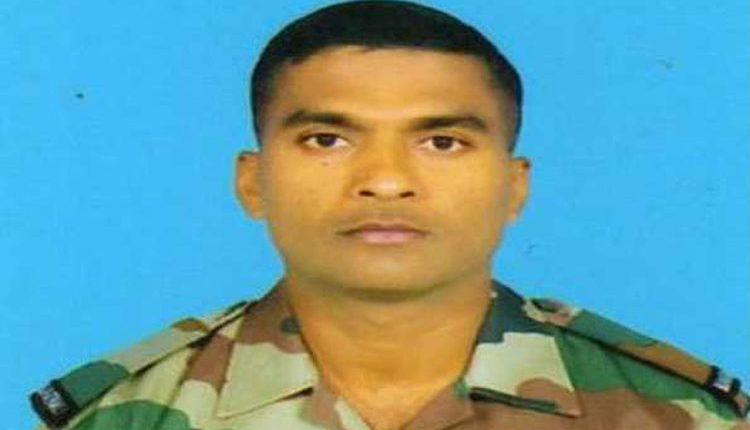 Kolhapur, Nov 23 (Agency) Havildar Sangram Patil was cremated at his native place Nigve-Khalsa village in Kolhapur district with military honours on Monday morning. He was martyred in Pakistan terrorist attack in Jammu and Kashmir’s Rajouri district on November 21. His mortal remains were brought by a special Airforce plane at Lohgaon Airport in Pune from Delhi and then, military vehicle took the body to his native place Nigve-Khalsa village. A huge procession was carried out from the main Street of the village to funeral place at a ground of Chanishet Vidhyalay’s ground.

The funeral pyre was lit by his father. Sangram Patil, Havildar in 16th Maratha Ashok Chakra Batalian, while defending the country’s boundary with Pakistan in Rajauri sector, was martyred in terrorists attack. He was the second jawan from the district within a week who attained martyrdom. Earlier, Rushikesh Ramchandra Jondhale of Bahirewadi in Ajara tehsil of this district, was killed along with three others in multiple case fire violations by Pakistan troops along LOC from Gurej to Uri sectors in JK on Friday(Nov 13). Paying homage to Martyr Sangran, Minister of State for Home Jayant Patil, who is also district guardian minister, announced Rs one crore each of financial aid to two martyrs Sangram Patil and Rushikesh Jobdhake, on behalf of the state government. Along Mr Patil, Sanjay Mandlik, MP, Daulat Desai, district collector, Shailesh Balkvde, district Superintendent of Police Pradeep Dhole, acting district soldiers welfare officer, senior political leaders and government officers were present at his funeral along with thousands of people from neighbouring villages and parts of the district.

Maha may be go soon for second lockdown: Ajit Pawar