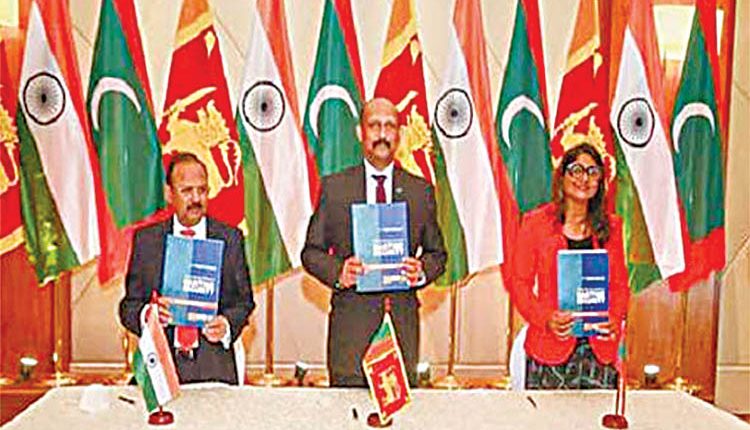 New Delhi, Nov 29 (Agency) India, Sri Lanka and The Maldives have decided to enhance mutual security cooperation in the Indian Ocean region with sharing of intelligence in newer areas such as terrorism, money laundering, and cyber security. Top officials of the three immediate neighbours and Mauritius and Seychelles met in the Sri Lankan capital Colombo for the 4th National Security level dialogue and exchanged views on maritime security.
“The three countries discussed mutual cooperation in the areas of Maritime Domain Awareness, Humanitarian Assistance and Disaster Relief, Joint Exercises, Capacity Building, Maritime Security and Threats, Marine Pollution, and Maritime Underwater Heritage in relation to the Indian Ocean region,” said a joint statement released after the meeting on Saturday. “The three states agreed to further strengthen cooperation in dealing with these Maritime Security challenges, to ensure peace and security in the region for common benefit,” said the statement. The External Affairs Ministry said the NSA level Trilateral Meeting has served as an effective platform for cooperation among Indian Ocean countries. India and Seychelles also held separate talks on the day in Seychelles. External Affairs Minister S Jaishankar met President Ramkalawan and Foreign Minister Swylvestre Radegonde and iterated India’s resolve to further enhance the India-Seychelles strategic partnership in the post-Covid era. Jaishankar spoke of the centrality of Seychelles to India’s vision of SAGAR (Security And Growth for All in the Region) that characterized India’s policy towards the Indian Ocean Region.

As a neighbour across waters, Seychelles is very much a part of New Delhi’s Neighborhood First policy as well. NSA Ajit Doval headed the Indian delegation at the Colombo talks with Sri Lankan Defence Secretary Kamal Gunaratne and Maldives Foreign Minister Mariya Didi. Mauritius and Seychelles, which attended the last meeting in 2014 as guest countries, were represented by their senior officials. According to the Sri Lankan Ministry of Defence, the three countries agreed to broaden cooperation by expanding the scope to improve intelligence sharing and include issues like radicalisation, terrorism, extremism, drugs, arms and human trafficking, money laundering, cybersecurity, and effects of climate change on the maritime environment. The heads of delegations agreed to meet regularly to share, discuss, and ensure timely implementation of decisions taken at the NSA meeting. It was also agreed upon to hold Deputy NSA level working group meetings bi-annually for cooperation at the operational level.