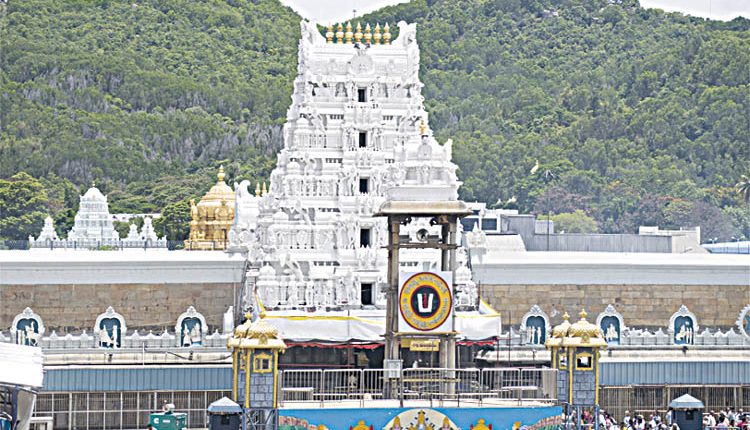 Tirupati, Nov 29 (Agency) Following court directions for more transparency and accountability in its functioning the richest Vaishnavite temple in the country Sri Venkateshwara temple, Tirumala has opened up many secrets and practices. First, it has announced the size of its assets, plans for investment of surplus funds and announced many devotees friendly and eco-friendly initiatives. It is now declared that TTD has landed assets of a whopping 8088 acres of land across the country. They include a total of 1128 assets including house sites of 6003.48 acres( 2,90,56843.88 yards) and agricultural land of2085.41 acres.

Most of them are donations to TTD by devotees. The details of properties including the properties which were auctioned since 1974 with Survey number, place, board resolution, auctioned date etc have been uploaded in the TTD website for public view. Ironically TTD has not done any physical verification in three decades and now also due to lockdown and corona guidelines came in way of verification and survey process, the board was told. The Tirumala Tirupati Devasthanams trust board which met on Saturday released a white paper on assets following criticism last month of the new board set up under YSRCP government was selling off landed properties of the Srivari temple. Following a strong wave of criticism on its earlier decision to invest TTD surplus funds in the State and central securities and bonds, yesterday’s board meeting had also rescinded resolved to continue its deposits in scheduled banks. During the lockdown period and drop in cash flow, the TTD board had plans to invest Rs 5,000 crore in high interest yielding government bonds etc. TTD had also bowed down to AP high court direction to provide Vaikunta dwaram darshan to devotees for ten days of instead of just two days of on Vaikunta Ekadasi and Dwadasi days. Now devotees can enjoy the holy Darshan for ten days from December 25 onwards.

Vaikunta Dwara darshanam was first introduced during the tenure of Mahants in 1,843 and was continued after TTD took over in 1945 but for only two days. However, at all the 28 Vaishnavite temples across the country, ten days of Vaikunta dwarf Darshan is observed. Now following a PIL by a devotee the AP high court has directed TTD to follow the traditions. TTD Trust Board Chairman Y V Subba Reddy has said that earlier lakhs of devotees used to arrive at Tirumala and wait for 2 days in queue lines for Vaikunta Darshan. In view of Covid-19 guidelines and only 15-20,000 per day, devotees allowed Darshan now and hence ten-day extension for Vaikunta Darshan is provided o Agama advisory. With Goal to Transform Tirumala as a Green and pollution-free pilgrim centre, TTD has in a phased manner introduced 100 to 150 Electric buses plying between Tirupati-Tirumala. TTD has also decided to utilise more and more non-conventional sources of energy like wind and solar in day to day operations like water hearing, steam cooking and lighting ghat roads and public lighting in Tirumala. It has already installed wind power and solar power units. Another major fallback decision was to reintroduce the Kalyanamastu program (mass free marriages for underprivileged couples with a new set of guidelines in all districts of AP)which was in vogue during the YSR period. In the final count, TTD had organised over 36,000 mass weddings and spent over Rs 1,200 crore on the project from 2007- 2012.