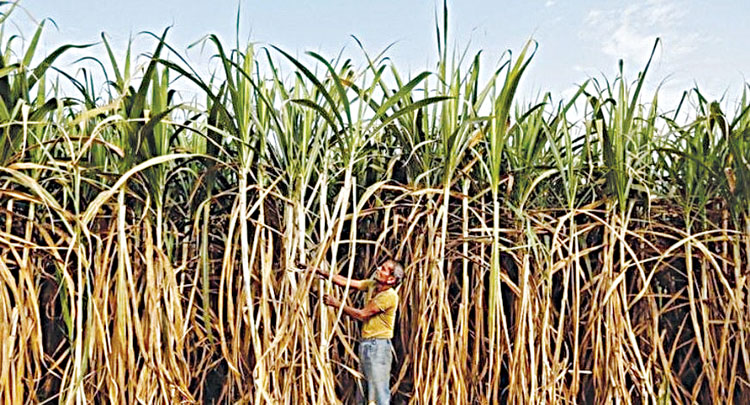 New Delhi, Jan 19 (Mayank Nigam) More than 5000 lakh metric tons (LMT) of sugarcane was produced in sugar season 2021-22, an official statement said on Thursday. During the season, record more than 5000 Lakh Metric Tons (LMT) sugarcane was produced in the country out of which about 3574 LMT of sugarcane was crushed by sugar mills to produce about 394 Lakh MT of sugar (Sucrose) out of which 36 lakh MT sugar was diverted to ethanol production and 359 LMT sugar was produced by sugar mills, the statement said. India emerged as the world’s largest producer and consumer of sugar as well as the world’s 2nd largest exporter of sugar after Brazil, in Sugar Season (Oct-Sep) 2021-22.

In every sugar season, production of sugar is around 320-360 Lakh Metric Tons (LMT) as against the domestic consumption of 260-280 LMT which results in huge carry over stock of sugar with mills. “Due to excess availability of sugar in the country, the ex-mill prices of sugar remain subdued resulting in cash loss to sugar mills. This excess stock of about 60-80 LMT also leads to blockage of funds and affects the liquidity of sugar mills resulting in accumulation of cane price arrears,” it said. As per the statement of Ministry of Consumer Affairs, Food and Public Distribution, during SS 2021-22, sugar mills procured sugarcane worth more than Rs 1.18 lakh crore and released payment of more than 1.15 lakh crore for the season with no financial assistance (subsidy) from Government of India. “Thus, cane dues for sugar season 2021-22are less than Rs 2,300 crore indicating that 98% of cane dues have already been cleared. It is also noteworthy that for SS 2020-21, about 99.98% cane dues are cleared,” the statement said. During 2021-22, revenue of more than Rs 20,000 crore was made by sugar mills or distilleries from sale of ethanol, the statement added.