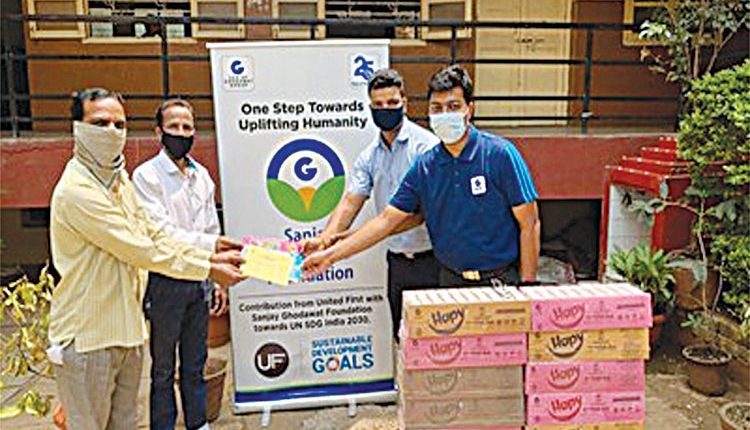 Kolhapur, Apr 5 (FN Representative) In a bid to promote the importance of nutrition in life, Sanjay Ghodawat Foundation (SGF) recently conducted a ‘Nutrition for Life’ campaign. The foundation under the guidance of its founder and noted philanthropist Mr. Sanjay Ghodawat distributed its premium and nutritious milkshake, Hapy, to over 350 underprivileged children in Kolhapur, Ichalkaranji, and Panhala.

SGF Nutrition for Life_2021
Under its first phase, this drive was executed at four different orphanages in Kolhapur, Ichalkaranji, and Panhala on 25th March 2021 where volunteers of SGF not just distributed Hapy Milkshake to children but also briefed them about the benefits of nutrition in daily lives. This drive was conducted at Balkalyan Sankul (Kolhapur), Navchaitya Balgruh (Ichalkaranji), Avani Balgruh (Kolhapur), and Shri Dilip Singh Raje Ghatge Balgram (Panhala), respectively.

A Positive Step Towards Malnutrition-free India
Prominent research suggests that inequitable distribution of resources is a major challenge in India that has impeded access to nutrition for a sizable population and harmed children the most. According to the National Health Survey, 2015-16, every second child, aged 0-5 years, from 20% of the poorest households in India suffers from some form of under nutrition. This drive is thus a significant positive step towards a fight against malnutrition. Hapy is a popular product of Sanjay Ghodawat Group that is known not just for its unmatched taste and quality but for its great nutritional value as well. Loaded with Protein, Calcium, Vitamins A & D, it is perceived as one of the best nutritious beverages in the market.

Always at Forefront to Serve Society
Sanjay Ghodawat Foundation is a widely admired non-profitable organization that has done enormous charitable work in diverse fields like Women Empowerment, Sanitization & Cleanliness, Education, Environment, Natural Disaster Relief Management, Health, etc. This is not the first time when SGF has extended its help for needy children, the foundation, in the past, has contributed immensely for the benefit of underprivileged children. Free education to 5,000+ children, school for visually impaired, free career guidance programs amongst various other initiatives.

“Malnutrition has been a big problem in India for decades. I am glad that SGF has started this drive and confident that SGF will work on this aspect in the future as well to contribute significantly in making India Malnutrition-free,” says Mr. Sanjay Ghodawat, Chairman – Sanjay Ghodawat Group.

Rupee down 28 paise against USD

Olena and Plix Takes The Wellness Market by Storm