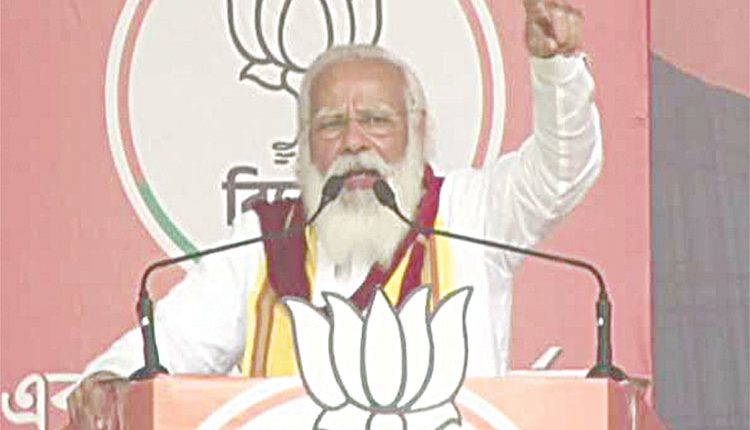 Cooch Behar, Apr 6 (FN Representative) Prime Minister Narendra Modi on Tuesday coined the slogan “Chalo Paltai” (let us make the change). Addressing a public meeting here, Mr Modi said, “Didi has started a new tax in Bengal – ‘Bhaipo Service Tax’! For this reason, today the voice is coming from every corner of Bengal – ‘Chalo Paltai, Chalo Paltai’.” Prime Minister targeted Chief Minister and Trinamool Congress (TMC) Supremo Mamata Banerjee for appealing to Muslims, saying TMC’s exit has already been confirmed. Mr Modi said Didi’s anger indicates she has lost polls “Didi, your anger, your resentment, your behaviour and your speech describe that you have lost the election,” he said. Addressing a public meeting here, Mr Modi said, “Recently, Didi said that every Muslim must get together and not allow their votes to be divided. Didi, it means you know that the Muslim vote bank, that you considered your strength, is also slipping away from you.”

“Didi, you are not proud that West Bengal is seeing more than 80% voter turnout. It means that you are losing. Didi, it is certain that you will lose. Didi, you have scored an own goal (like in football) in these elections,” he said. Mr Modi also lambasted the chief minister for her outburst against the Election Commission of India (ECI) and Central armed forces saying once the player finds fault with the judges and referees and security force then it was obvious he or she lost the game. He reminded Ms Banerjee that it was the poll body, EVMs and central forces that brought the TMC into the government in 2011 as the TMC leader always sought for the deployment of central armed forces to ensure free and fair polling against the then Communist government.

“Didi, the day you did ‘Khela at the polling booth in Nandigram, the same day the country knew that you have lost the elections,” the Prime Minister said “For 10 years, women, Dalits, backward classes, farmers and tea workers were subjected to injustices, but Didi (Mamata Banerjee), you were just an onlooker,” The Prime minister said, “When your party announces that Didi will now contest from Varanasi, then anyone can easily understand that TMC’s is going to be faded away. Every day you have to say that you are winning Nandigram. But after the game you played on the polling day in Nandigram, the entire country got to know that you have lost,” Mr Modi said. Mr Modi said Didi has been asking, “Is BJP God that it already knows it is winning polls?” I want to say to her that we’re normal people engaged in the service of the public.” “I want to tell the people that I’ll return your love with interest in the form of development,” he said.

“Didi has problems with people sporting Tilak and wearing saffron clothes, “ Mr Modi said. “No social scheme will be stopped if BJP comes to power, Didi making false claims,” the Prime Minister alleged. Mr Modi asked his team of doctors to assist a woman who faced some issues due to dehydration at an election rally here. At the outset, Mr Modi said “Today I have come to Cooch Behar on such an occasion when BJP is celebrating its Sthapna Diwas. This land of Bengal has given thoughts, values, inspiration, continuous energy to the BJP in the last two phases of voting.