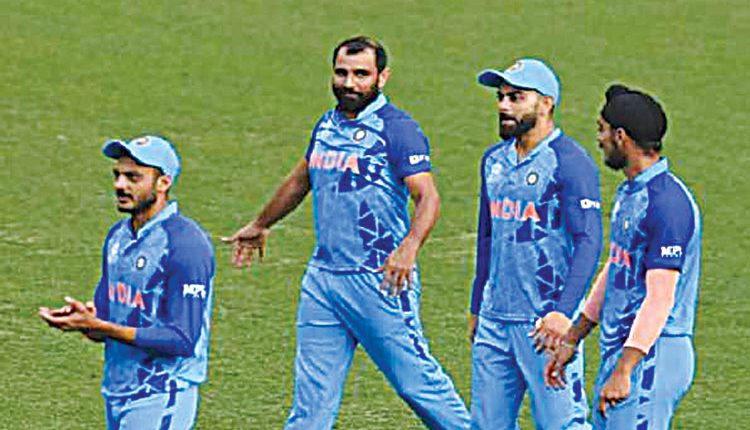 Brisbane, Oct 17 (Agency) Brilliant half-centuries from KL Rahul and Suryakumar Yadav followed by a Mohammed Shami’s terrific final over helped India beat Australia by 6 runs in the T20 World Cup warm-up match here at The Gabba on Monday. Riding on Rahul and Suryakumar Yadav’s half-centuries from, India posted 186/7. In reply, Australia were bowled out for 180. Chasing a target of 187, Australia needed 11 runs to win off the final over, but Shami, bowling his first over of the match, executed his yorkers to perfection; he conceded only 4 runs and picked up three wickets.

The Aussie opening duo of Mitchell Marsh (35 off 18) and Aaron Finch put on a partnership of 64 runs. Even though Marsh was dismissed, skipper Finch continued the fight, scoring a superb 54-ball 76. Glenn Maxwell also contributed a vital 23 as well.After Maxwell’s dismissal, none of the batter managed to touch the double figure and Australia suffered a drastic batting order collapse.Earlier, putting into bat first, Openers Rahul and skipper Rohit Sharma put on a blazing partnership of 78 runs in 7.3 overs to set the platform for India. Rahul was the aggressor and scored a blistering 33-ball 57 before getting dismissed off Glenn Maxwell in the eighth over. In the next over Ashton Agar removed skipper Rohit for 15.Virat Kohli couldn’t stay longer on the crease as Mitchell Starc sent him packing for 19. Suryakumar then came in and scored a quickfire half-century (50 off 33 balls), while Dinesh Karthik chipped in with a handy 14-ball 20 to help India past the 180-run mark.India will play their next warm-up match on October 19 against New Zealand at the same venue.

Will request PM to allow Sourav to run for ICC chairman’s post: Mamata