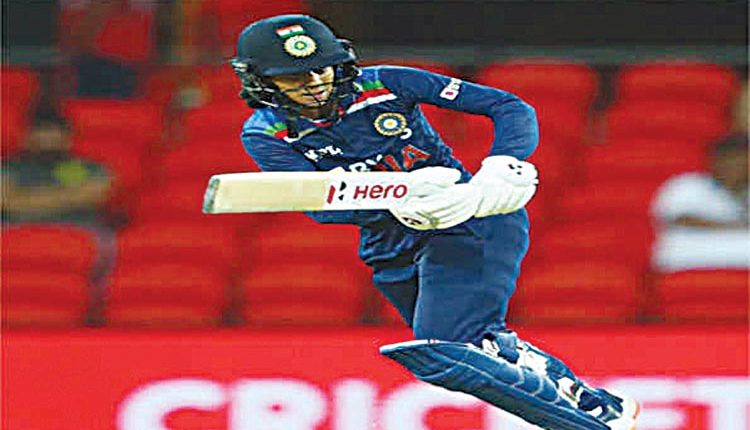 June 23 (FN Agency) Jemimah Rodrigues (36off 27 not out) and Deepti Sharma (17 off 8 not out) fiery finish helped India to post fighting total before a disciplined bowling effort ensured a comprehensive 34-run win over Sri Lanka in the first T20I here at Rangiri Dambulla International Stadium on Thursday. Opting to bat first after winning the toss, India’s start to the innings was less than ideal. The first three overs of pace didn’t pose any problem for India but the introduction of spin turned the game around. In her very first over, Lankan spinner Oshadi Ranasinghe had the India batters in tangles. The off-spinner was on a hat-trick after dismissing Smriti Mandhana (1) and Sabbhineni Meghana (0) before skipper Harmanpreet Kaur negotiated the hat-trick ball. The boundaries continued to flow even after the fielding restrictions were lifted before Sri Lanka struck at the vital time to remove the dangerous Shafali Verma for 31. One brought two for the hosts as Harmanpreet was trapped in front for 22.India were 85/5 with five overs to go and needed to go big in the death overs. Pooja Vastrakar set the tone for the remaining overs with two boundaries off Ranasinghe.

The next over too fetched two fours for India but Inoka Ranaweera had the last laugh with the wicket of Vastrakar.Deepti teed off in the final over with three consecutive boundaries while Rodrigues finished the innings in style with a six. India scored 53 runs in the final five overs to post a fighting total of 138/6.In response, Sri Lanka were managed to score 104 in 20 overs. Deepti, who had already made a difference with the bat, could do no wrong as she scalped Vishmi Gunaratne just off her second ball. Harshitha Madavi and Chamari Athapaththu ensured there was no more damage in the powerplay but couldn’t make the best use of the fielding restrictions. At the end of six overs, Sri Lanka were reeling 25/1.With the asking run rate already over eight, Athapaththu fell to Radha Yadav in her bid to accelerate the scoring. Deepti got in the game two balls later — this time as a fielder — with a stunning tumbling catch in the deep to dismiss Harshitha Madavi (10).Kavisha Dilhari put up some resistance, first with a 27-run stand with Nilakshi de Silva and then 32 runs partnership with Ama Kanchana. However, both partnerships came at well below the required run rate.Dilhari remained unbeaten on 47 but could not stop India from romping home by 34 runs.