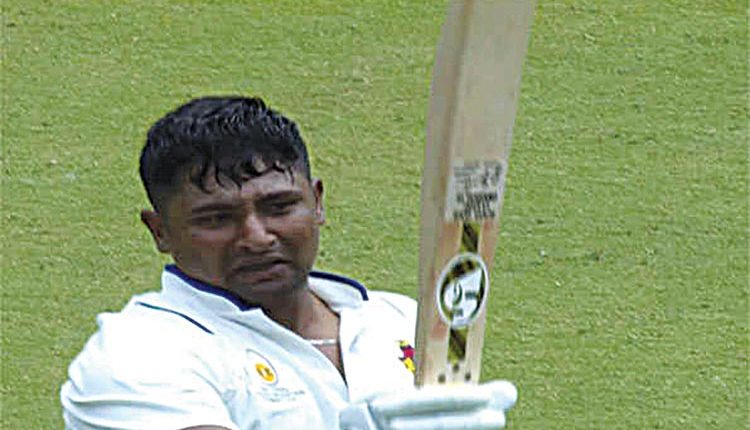 June 23 (Representative) Young Mumbai batsman Sarfaraz Khan’s fourth century of this season kept the 41-time Ranji champions Mumbai in the hunt as they posted a 374 all out after a mini middle order collapse in their first innings against Madhya Pradesh on Day 2 of the Ranji final at Chinnaswamy Stadium here on Thursday. In reply, Madhya Pradesh has given a solid start. At stumps they were one down 123 runs in 41 overs with opener Yash Dubey batting on 44 and Shubham Sharma on 41. The team trails Mumbai by 251 runs with nine wickets in hand.Madhya Pradesh lost their first wicket after Himanshu Mantri was trapped LBW off Tushar Deshpande for 31 runs in first over after tea.

But there don’t seem to be any demons in the track that worried Madhya Pradesh batsmen, and if it continues to behave in the same way, it could pose a problem for Mumbai on Day 3.Sarfaraz was star of the day as he scored 134 off 243 balls and went past 900 runs and looked hungry to join the elite 1000 runs club in a season that includes a great like Sachin Tendulkar. In the 2019-20 season he had amassed 928 runs in nine innings of six matches.Madhya Pradesh bowlers could not crack through the bat of Sarfaraz after they broke through the Mumbai middle order with vengeance by picking up three quick wickets in the second session of Day.

After reaching his century, Sarfaraz was seen celebrating with wet eyes and ending it with a classical Shikhar Dhawan style thigh-five. The 23-year-old resumed the batting on his overnight score of 40 not out and reached his half-century off 152 deliveries. Sarfaraz raised the tempo and began to lose his partners at the other end. He scored his next fifty runs off just 38 deliveries to help Mumbai get past the 300-run mark. Madhya Pradesh started on a firm note with pacer Gaurav Yadav striking in the first over. He removed overnight batsman Shams Mulani for 12 and then castled Tanush Kotian for 15.Gaurav finished with figures of 4 for 106. Anubhav Agarwal scalped three and spinner Saransh Jain bagged two. Kartikeya scalped one. Mumbai had started the day from the overnight score of 248/5.Brief scores: Mumbai 374 all out in 127.4 overs (Sarfaraz Khan 134, Yashasvi Jaiswal 78; Gaurav Yadav 4/106, Anubhav Agarwal 3/81) lead Madhya Pradesh 43/0 in 16 overs (Himanshu Mantri 31 not out, Yash Dubey 11 not out) by 331 runs.