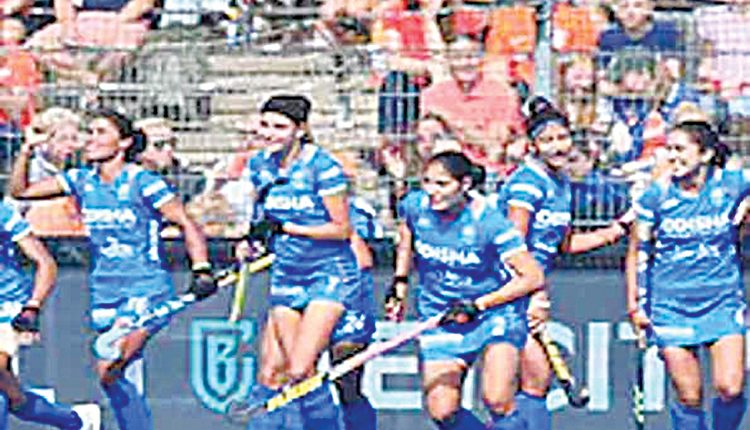 Birmingham, Aug 3 (FN Agency) Indian women’s hockey team played a high octane match and booked a place in the semifinal at the Birmingham 2022 Commonwealth Games after defeating Canada 3-2 on Wednesday in the last pool A match. Salima Tete (3′), Navneet Kaur (22′) and Lalremsiami (51′) found the back of the net for India, meanwhile, Brienne Stairs (23′) and Hannah Haughn (39′) scored for Canada.India’s opponent for the semifinal will be decided after the final Pool A match between England and Wales on August 4. However, India have confirmed a top-two finish in their Pool.India got off to an aggressive start and earned a penalty corner in the third minute of the match.

Navneet Kaur produced a fantastic ball from the left flank and Salima Tete tapped the ball into the goal to help India take a 1-0 lead.Vandana Katariya made a great run through the left flank, but she couldn’t find a way to extend India’s lead. India continued to put pressure on their opponents and went into the first break with the lead in their hands.India women rode on the momentum and held most of the ball possession at the start of the second half. In the 22nd minute, Lalremsiami carried out a spectacular pass from the right flank to Navneet, who struck the ball into the goal to help India extend their lead at 2-0.However, soon after, Brienne Stairs converted a penalty corner in the 23rd minute and kept Canada in the game.

The Canadian team made a few inroads into the Indian circle and Madeline Secco took a shot in the 29th minute, but the ball went wide off the right post.Lalremsiami tried to find a way to penetrate the circle from the right flank in the third quarter but the Canadian defense stood tall and kept her at bay. In the 39th minute, Canada earned a penalty corner and Hannah Haughn found the back of the net to equalize the score at 2-2. The Canadian side won back-to-back penalty corners in the last minute of the third quarter, but the Indian defence unit ensured that the 2-2 deadlock wasn’t broken.The Indians got very close to the goal in the opening minutes of the final quarter, but the Canadian defense unit kept the ball away from the goal. Then, Lalremsiami converted a penalty corner in the 51st minute as India took the lead at 3-2. Vandana Katariya carried out a spectacular run in the 57th minute, but she couldn’t find the back of the net. The Indian team continued to put pressure on their opponents and eventually walked off the field as winners of the match.