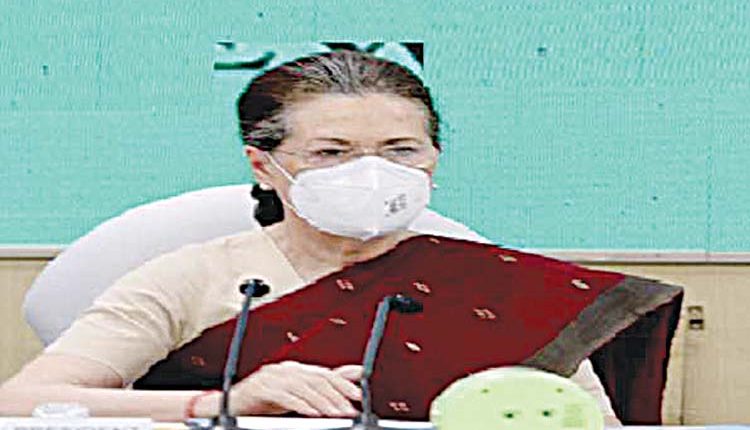 New Delhi, Sep 26 (Agency) Congress President Sonia Gandhi met party leaders Ajay Maken and Mallikarjun Kharge over the developments in Rajasthan, and has sought a written report. A day after the Congress in Rajasthan plunged into a crisis as several MLAs loyal to state CM Ashok Gehlot rebelled ahead of a legislative party meeting, and submitted resignation over a possible appointment of Sachin Pilot as Rajasthan chief minister, Maken and Kharge, who had gone to Rajasthan as AICC observers returned to the national capital, and met the Congress president. Maken said after the meeting that the Congress president was briefed in details about the decision, and a written report will be submitted to her by Monday night or Tuesday morning.

He may be the Congress president on that day, is it not a conflict of interest?” Maken said. The other two demands are that discussions with Congress MLAs should be held in groups and that the successor should be from among the Gehlot loyalists. “They said to meet MLAs in a group, this has never happened before. We talk to MLAs individually so that people can express their opinion freely… The 102 MLAs who are supporters of Ashok Gehlot, say the CM should be one of those who had supported him two years back,” said Maken. He also said that it was prima facie a case of indiscipline. “When a formal meeting of Congress legislative party is called, any parallel meeting called is prima facie indiscipline,” said Maken. Senior Congress leader Kamal Nath was meanwhile called to Delhi where he met the Congress president. Nath is likely to be roped in for a mediation in the crisis. Ninety-two MLAs in Rajasthan threatened to resign on Sunday, demanding that Ashok Gehlot, who has emerged as the front-runner for the post of the Congress president, to remain the Chief Minister. Gehlot on a recent visit to Delhi had said he would continue as the Rajasthan chief minister. However, party leader Rahul Gandhi at a recent press conference said that the party should stick to the decisions made at the Udaipur meet, which included the principle of ‘One person, one post’.