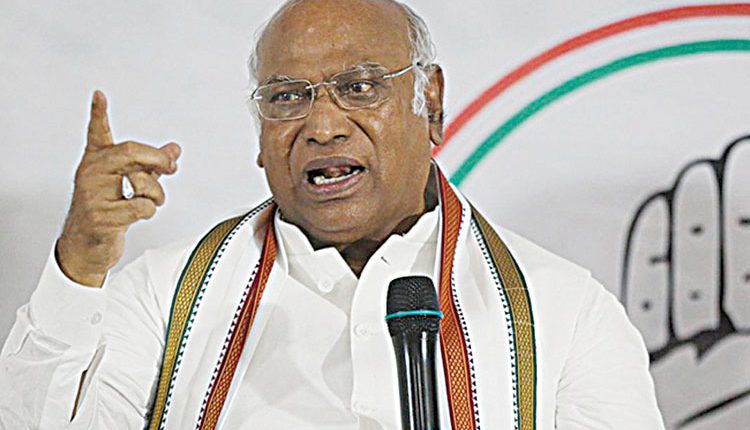 New Delhi, Nov 26 (FN Agency) Congress president Mallikarjun Kharge on Saturday accused the BJP-led government at the Centre that it has “surrendered” itself and its institutions to the “diktats” of the RSS. “The government has completely surrendered itself and its institutions to the diktats of the RSS, an organisation that pushes hateful propaganda under the garb of social service. In fact, it is no longer incorrect to use the terms RSS and BJP interchangeably,” Kharge said in a statement on the occasion of Constitution Day. The Congress chief claimed that since BJP came to power at the Centre in 2014, the RSS has used it as a “political vehicle on every opportunity to curtail freedoms, enshrined in the Constitution”. “Illegal has become legal because the ‘fringe’ has now become mainstream. The foremost tangible spirit of our democracy is being distorted and disrespected by people who are using it as a means to push a completely contrasting agenda,” Kharge said in an apparent reference to the BJP and RSS. He added, “The BJP-RSS cadre’s only alternative to constructive dialogue is violence.

The natural instincts of this group and its messengers are only to subvert, and their only motivation is to divide the country along religious, caste and communal lines.” People who perpetrate RSS ideology are against the Constitutional guarantee of reservation to Dalits, Adivasis and Backward classes, Kharge claimed. The Congress chief also alleged within the system, the ruling party has restricted all avenues for the Opposition to express dissent. “Any dissent by the Opposition is being ‘tackled’ by coercively misusing central investigative agencies – CBI and ED etc against them. The functioning and independence of the Election Commission of India (ECI) has been jeopardised. Opaque system of Electoral Bonds enforced as money bill has been brought to give undue advantage to ruling party,” he said. Kharge said with Bharat Jodo Yatra, the Congress party has embarked on a mission to unite our nation at this “critical juncture”, against the forces of hatred divisiveness and socio- economic deprivation. We have always taken it upon itself to safeguard our constitutional morality, he added. “This Constitution Day, let us unitedly take ownership of bringing India back to its constitutional values and restoring the nation to a time when these values thrived,” Kharge appealed. The only way to control this new ”hegemonic” disposition is to counter it with ideological and moral strength, he asserted.