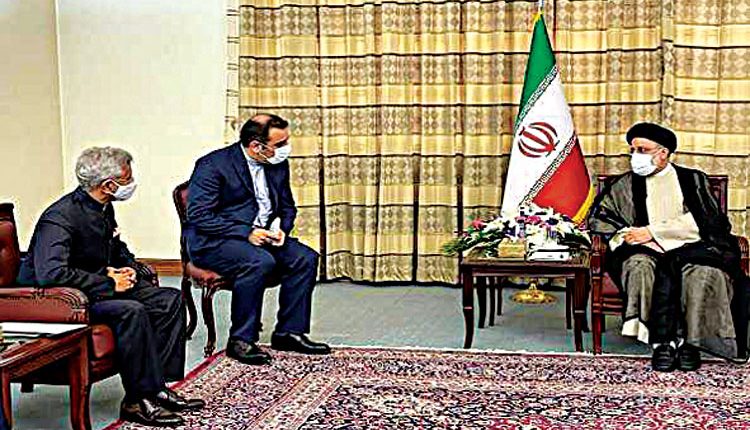 New Delhi, Jul 7(FN Bureau) India and Iran on Wednesday stressed the necessity of continuing intra-Afghan talks to reach a comprehensive political solution to end the conflict in Afghanistan and chart a peaceful future for all its nationals. External Affairs Minister Subrahmanyam Jaishankar on his way to Moscow stopped over in Tehran to hand over a congratulatory message from Prime Minister Narendra Modi to President-elect Ebrahim Raisi. “Thank President-elect Ebrahim Raisi for his gracious welcome…Appreciate his warm sentiments for India. Deeply value his strong commitment to strengthen our bilateral ties and expand cooperation on regional and global issues,” the EAM later tweeted.

Jaishankar and his Iranian counterpart Mohammad Javad Zarif held a meeting in which they discussed the current regional developments, especially the security situation in Afghanistan in view of the renewed fighting between the Afghan government forces and the Taliban following the US and NATO troops pullout. Ahead of the meeting, Zarif hosted an intra-Afghan meeting attended by representatives of the Afghan government and Taliban’s high political delegation. The two foreign ministers also discussed cooperation in the Port of Chabahar in which India has invested and transports goods to Afghanistan and Central Asia. Both also discussed the nuclear talks between Iran and the 4+1 in Vienna that would see the end of US sanctions on Iran. Jaishankar described his discussions with Zarif as “useful”.

Director General of Iranian Foreign Ministry’s West Asia Department Seyyed Rasoul Mousavi also tweeted about Jaishankar’s visit and said, “I am sure this visit will be the basic basis for Iran-India relations during the presidency of Seyed Ebrahim Rayeesi.” In September 2020, the EAN was in Iran for a short visit and met senior Iranian officials before his visit to Russia. The EAM will be in Moscow to attend a meeting of the India-Russia Trade, Economic, Scientific, Technological and Cultural Cooperation Commission and talks with Foreign Minister Sergei Lavrov.