India should be invited to G7 leaders meeting 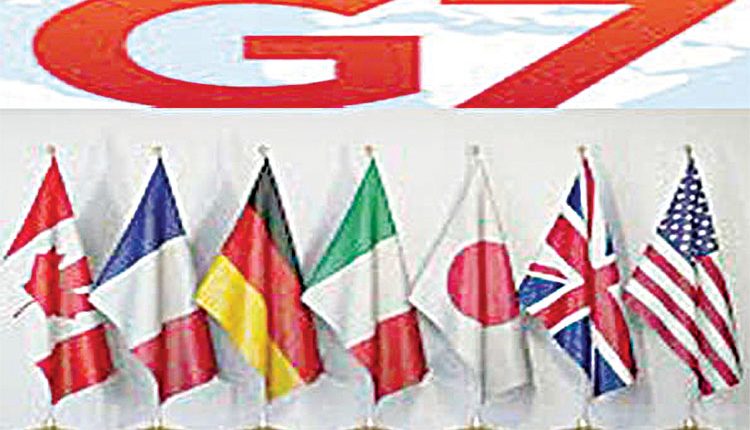 London, Aug 24 (Agency) The G7 Foreign Affairs Committee Chairs on Tuesday said that no member of the international community should unilaterally recognise the Taliban regime in Afghanistan, and the key criteria for recognition should include repudiation of all cross-border terrorism, equality of rights for girls and women and protection of minority ethnic groups. The committee also said that India should be invited to Tuesday’s G7 leaders meeting. The Foreign Affairs Committee Chairs of France, Germany, Italy, the UK, the US and the European Union, extended their deepest sympathies to the people of Afghanistan ‘as they contend with the brutal Taliban military takeover of the country and believe that the G7 and broader international community should work to hold this Taliban-led regime accountable’, it said in a statement.

It said that in its first joint statement on 10 June 2021 ahead of the leaders’ summit in Carbis Bay, Cornwall, they set out seven goals aimed at addressing the critical issues facing the international community of states. These included the defence of democratic values, specifically, we urged the G7 governments to unite with like-minded partners to form a robust defence of the rule of law, human rights and democracy, standing with the vulnerable where they are exploited and defending the rights of those who oppose the expansive and exploitative instincts of autocrats.

On Tuesday, the chairs set out a request for action and coordination from G7 nations, working with allies and partners, to avert a humanitarian crisis in Afghanistan. “We believe we have a role in working together to mitigate the serious consequences for global security and regional stability the current emergency (in Afghanistan) could trigger. It urged the G7 governments to formulate a three-pronged response. These included: “In order to implement an orderly evacuation of those most vulnerable within Afghanistan, the G7 governments “should avoid arbitrary dates for ending military support to the evacuation or imposing artificial caps on the number of evacuees, it said. Either of these could increase pressure on those seeking assistance and those in the frontline of the refugee emergency. Instead, these decisions should be driven by the steps required for an orderly process with the primary objective of protecting of the most vulnerable and assisting those in most need, it added. It said the G7 should also call on the UN to coordinate with the international community in responding to the likely refugee and humanitarian crisis. Afghans will be in need of emergency support whether inside Afghanistan or out and the role of the World Food Programme and the UNHCR will be essential to supporting those in critical need. The second point enumerated was the “Framework for dealing with the Taliban”. It said: “No member of the international community of states should unilaterally recognize the Taliban regime. There must be a coordinated process, ideally through a resolution of the United Nations Security Council to ensure commitments entered into by the Taliban are seen as binding.

The key criteria for recognition should include, but not be limited to repudiation of all cross-border terrorism, including Al Qaeda and associated groups; equality of rights for girls and women; protection of minority ethnic and religious groups; commitment to democratic elections; and ending all narcotics related activity. It is the actions that will count.” It said a monitoring and enforcement mechanism should form part of any framework agreed with the Taliban to ensure compliance with its commitments. “There is little indication from its past or present behaviour that the Taliban is committed to any of these principles, so the G7 countries should be prepared to isolate the Taliban and impose robust sanctions should violations reach an agreed threshold,” it added. Under the third point, titled Global Security and Regional Stability, it said that the withdrawal of US and allied forces from Afghanistan “should not be misinterpreted by the global community as any weakening of resolve from G7 governments in taking all necessary measures to combat cross-border terrorism, to support regional cooperation or advance democratic values.

With the spill over of terrorism possible, we would like lo see India invited to attend this G7 meeting’. As other terror groups are beginning to muster in the Horn of Africa and reawaken movements elsewhere, we believe the African Union should be invited to attend individual G7 meetings when appropriate. It said this would promote a regional shift for governments and ensure that the spill over effects of Afghanistan which could destabilise neighbouring countries are constantly monitored by those closest to the likely areas of threat. “The export of terror, whether in South Asia, the Middle East, East Africa, or any other part of the world, should be met with swift and decisive action,” it said. It expressed hope that the G7 governments would be able to agree on a concrete set of outcomes from the emergency meeting of leaders. The members of the G7 are Canada, France, Germany, Italy, Japan, the United Kingdom, and the United States, with the European Union present as an observer.

Nirvana Being Launches N95 Masks in Fun Designs For Kids