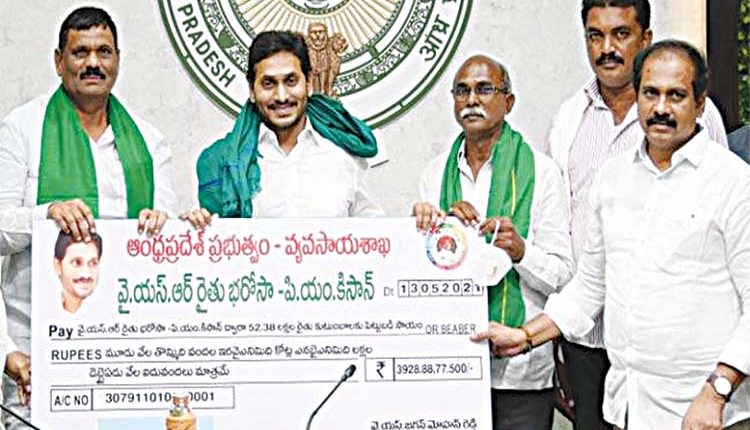 Vijayawada, May 13 (FN Representative) Andhra Pradesh Chief Minister Y S Jagan Mohan Reddy on Thursday released the first tranche of YSR Rythu Bharosa-PM Kisan for the consecutive third year, by crediting Rs.3928.88 crore into the accounts of 52.38 lakh farmers, where each eligible farmer would get Rs.7,500. Speaking on the occasion, the Chief Minister said that so far the State government had spent Rs.68,000 crore alone for the benefit of farmers in the last 23 months and under the Rythu Bharosa alone Rs.17,029 crore had been spent.

“In all these 23 months, the government has directly credited Rs.89,000 crore into the accounts of beneficiaries under various schemes without any discrimination or corruption, with full transparency and accuracy”, he said. Mr Reddy said that Andhra Pradesh is the only state in the country which is extending an input subsidy of Rs.13,500 to farmers, including the tenant farmers and peasants cultivating forest and assigned lands, under the Rythu Bharosa scheme. Although the government had promised to provide Rs.12,500 under Rythu Bharosa for four years, seeing the hardships of the farmers, the government increased the amount to Rs.13,500 for a period of five years, he stated.

Listing out the allocations under various schemes, the Chief Minister said that the government had spent Rs.1261 crore benefiting 67.50 lakh farmers under YSR Zero-Interest Crop Loans and also provided Rs.1968 crore to 15.67 lakh farmers as YSR Free Crop Insurance scheme, Rs.1038 crore was given as Input Subsidy for those farmers who lost their crops in natural calamities. “ Besides these, the government has spent Rs.18,342 crore for procuring paddy and Rs.4761 crore towards purchasing other crops and supporting the farmers. In order to provide free nine-hour electricity to farmers during day time, Rs7,430 crore was spent.

Additionally, the government has cleared Rs.960 crore paddy procurement arrears and Rs.384 crore seed procurement arrears left by the previous TDP government”, he explained. Mr Reddy said that Rs.2,000 crore would be credited into the accounts of 38 lakh farmers on May 25 under the YSR Free Crop Insurance. He said that the government kept every promise made during elections and strictly implemented the election manifesto. A griculture Minister Kursala Kannababu and MP Balashouri were among a host of officials who were present.