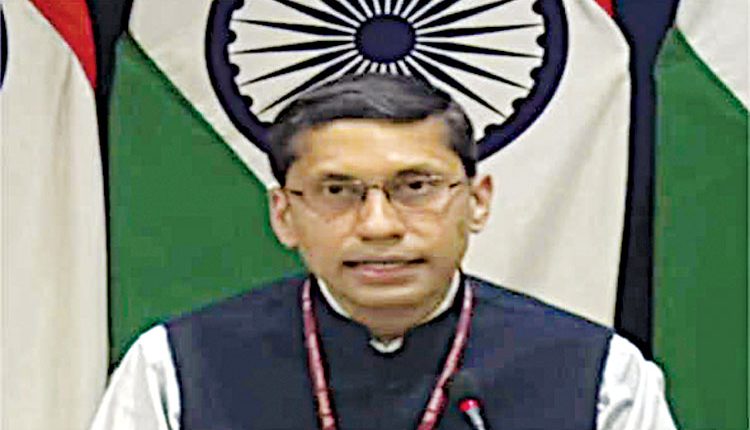 New Delhi, Aug 27 (FN Bureau) India said on Friday it is waiting to see how the situation develops in Afghanistan and added that there is no clarity yet about any entity forming government in Kabul. Ministry of External Affairs spokesperson Arindam Bagchi, answering queries at a media briefing, said the situation in Afghanistan following the Taliban takeover on August 15 is very fluid. “The situation on the ground is uncertain, as you all know. The prime concern is the security and safety of the people,” he said. Asked if India is prepared to recognise a Taliban regime in Afghanistan, he said, “Currently there is lack of clarity or no clarity about any entity forming a government in Kabul… So I think we are jumping the gun here regarding recognition. “We, of course, continue to monitor the situation very carefully; this is an evolving situation, and we are in touch with all stakeholders,” Bagchi said. Asked to explain what was meant by the statement that there is lack of clarity on which entity would form government, he said there are “lots of stories going around on whether who will be represented in the government, whether the government will be inclusive, whether other elements of Afghan polity will find representation in the government; so that’s why I wouldn’t like to speculate on it.

“There was a peace process being talked about, there are discussions going on I understand even now; so let’s wait to see how it develops, so that’s the reason we said this. We are aware of the ground situation,” he added. He said the current focus is on the security situation in Afghanistan. “We have been seeking a peaceful, prosperous and democratic Afghanistan. We understand that there have been changes on the ground, we are currently monitoring it very closely. The current focus is on the security situation, on Afghanistan evacuations and seeing how it unfolds. I think most other countries are also in that frame of, I would say to some extent, wait and watch,” he said in answer to queries on what conversations India was holding with other countries on Afghanistan. “I think that has been considering the changes on the ground, and while some greater clarity and stability emerges in Afghanistan, that is what I would say is our focus.. We are discussing this with also our friends, how peace can return and stability and how the evacuation can be conducted.” Ever since taking over Kabul, the Taliban have been holding talks with different politicians and groups across Afghanistan, as well as envoys of foreign countries, including Qatar and China. Though the Taliban announced a few days ago that they are close to announcing formation of a government there has been no movement so far. According to reports, the Taliban are planning to set up a caretaker government that will include leaders from all ethnicities and tribal backgrounds in the country.

Referring to the statement issued on Thursday night following the airport bombings, the spokesperson said that India has issued a statement strongly condemning the deadly suicide bombings outside Kabul airport that killed over 90 people, including 13 US Marines, and left 150 others injured. “We are in touch with various countries and partners,” he said, adding that Prime Minister Narendra Modi and External Affairs Minister S. Jaishankar have been holding conversations with partners on Afghanistan He said the conversations were also taking place at the Foreign Secretary level and at the level of senior officials. “It is a matter of concern that this kind of security situation happened there. We will continue to be closely in touch with all our partners on this issue,” he said. Prime Minister Narendra Modi has discussed the Afghan situation in his telephone call with Russian President Vladimir Putin and with German Chancellor Angela Merkel, while Jaishankar has held talks with his counterparts from Germany, the US, France and Britain, among other countries.