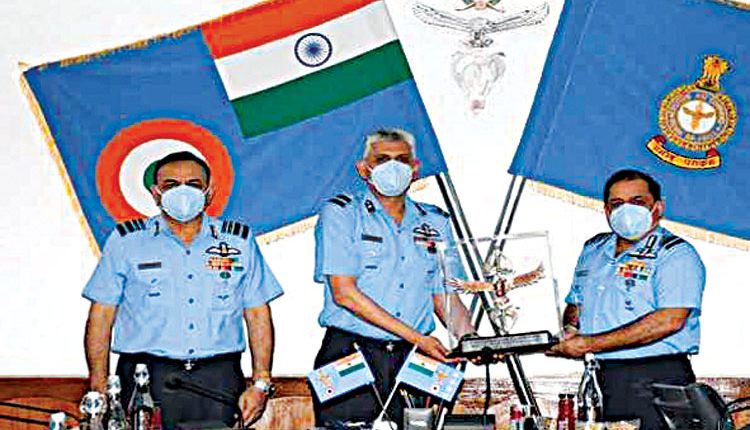 New Delhi, Aug 27 (FN Bureau) Amid tension on the India-China border, Air Force Chief RKS Bhadauria reviewed the preparedness in the eastern sector, emphasising on its strategic importance as he addressed a conference of Indian Air Force commanders in Shillong. Air Chief Marshal Bhadauria attended the two-day Commanders’ Conference which began on Thursday, an official release said today. The conference reviewed the progress of operational goals set for the Eastern Air Command and highlighted discussions on ways and means to optimise full spectrum combat readiness, it said. With India maintaining extra vigil, the Air Force Chief highlighted the increasing importance of the Command in the overall strategic perspective.

He expressed satisfaction over strengthening of capability and infrastructure at various stations including Advanced Landing Grounds (ALGs) in the eastern sector. Air Chief Marshal Bhadauria urged the commanders to enthuse the younger air warriors to put their training and skills to full use in their assignments to upgraded and new generation systems and weapon platforms. He appreciated the contribution of all personnel of the Eastern Air Command in their consistent efforts to improve their operational output backed by a strong maintenance and administrative support system. The IAF Chief awarded trophies to stations for achieving excellence in the fields of operations, maintenance and administration.

Air Force Station Tezpur was awarded the trophy of ‘Best Flying Station – Pride of EAC’ and Air Force Station Salua was declared the ‘Best Non-Flying Station’. India and China are having a stand-off in some areas along the border in Ladakh after the Chinese side transgressed. A violent face-off between the armies of the two countries took place in June last year. The 12th round of the Commander-level talks between the two armies will be held on Saturday to further discuss disengagement. In 2018, India and China had a standoff in Doklam, an area contested by Bhutan and China, which lasted over two months before the two countries decided to withdraw.