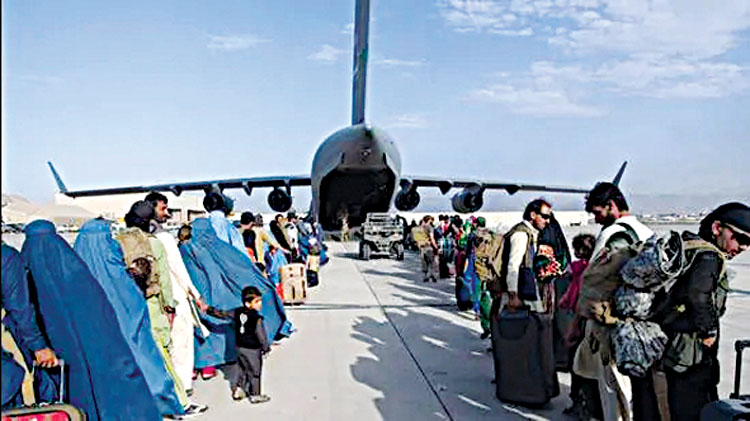 New Delhi, Aug 27 (Agency) Around 20 Indian nationals, along with some Afghan Sikhs, were trying to reach Kabul airport on August 25, but faced difficulty in reaching the airport for the evacuation flight to India, the Ministry of External Affairs said on Friday. MEA spokesperson Arindam Bagchi said the last Indian flight out of Kabul had only 40-odd people. “The last flight that was coming had only about 40-odd people…we were able to operate about six flights. We were hearing reports that Afghan nationals were facing difficulties in reaching the airport; we know that a number of Afghan nationals, including Afghan Sikhs, could not reach the airport for the evacuation flight on August 25. “Some Indians, around 20, but I don’t have the number, were also trying to reach; and as you’ve seen the kind of chaos at the airport, they could not reach; so our flight had to leave without these Indian nationals, and if we could have brought some Afghan nationals, Afghan Sikhs through that,” he said at a media briefing.

Asked how long the Afghans evacuees coming to India could stay, he said that the e-emergency visas for Afghans are for six months. “They are coming under the six-month visa regime. And we will take it from there, see at the end of it, see what happens there. As we said, it is an evolving situation, making long-term plans is not the best of ideas considering the changes in the last few days,” he added. At least 140 Afghan Hindus and Sikhs headed for India were denied access to Kabul airport by the Taliban on August 25, Sikh leaders said here. The group of 140 Afghan Hindu and Sikh pilgrims seeking to attend the 400th birth anniversary celebrations of Sri Guru Tegh Bahadur in Delhi was denied access to Kabul airport by the Taliban, the president of Gurdwara Arjan Dev here said on Thursday. The group was scheduled to arrive on Thursday in Delhi from Kabul but was prevented by the Taliban from going inside Kabul airport on Wednesday night. Guljeet Singh, President of Gurudwara Guru Nanak Sahib Ji , Vikaspuri, said, “We regret to note that last night these law-abiding pilgrims were turned back by Taliban security forces from the airport after waiting for more than 15 hours in their convoys.” He has an Afghan origin. “We appeal to the Taliban to facilitate an early departure of the Afghan Hindu and Sikhs pilgrims in the interest of humanity at the highest level,” Puneet Singh, President of Indian World Forum, said in the statement.