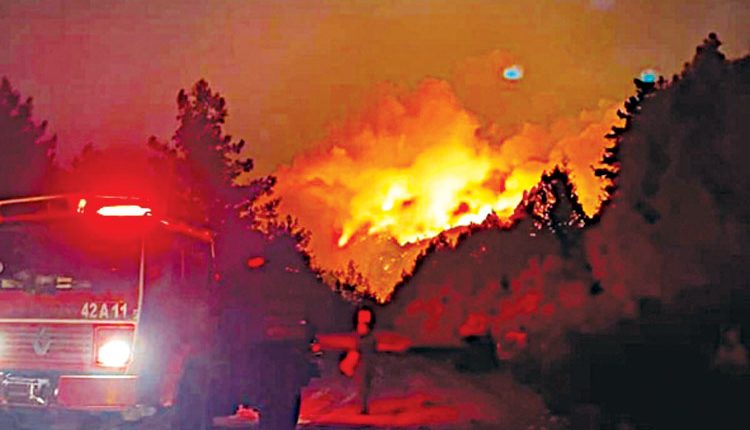 Istanbul, Aug 2 (FN Agency) Turkey has been battling wildfires that erupted in the southern and southwestern coastal resort towns and have lasted six days, officials announced Monday. “We have controlled 125 out of the 132 fires in the last five days, and are still fighting the remaining seven ones,” Agriculture and Forestry Minister Bekir Pakdemirli told reporters in Mugla Province.

Firefighters have hard times in Marmaris and Bodrum, the resort towns of Mugla Province, because of a low humidity rate which dropped to 10 percent in the morning hours. “Under normal conditions, the humidity should not be below 30 percent,” Pakdemirli explained. He pointed out that the fire in Manavgat, a resort town of Antalya province, continues and has the potential to cause new evacuations. According to Interior Minister Suleyman Soylu, approximately 10,000 citizens have been evacuated from their houses in Mugla. Soylu said eight neighborhoods were completely deserted while five others partially evacuated as blazes hit the residential area The fires have claimed eight lives so far in Turkey.

Meanwhile, the European Union announced that the bloc would send three firefighting planes from Croatia and Spain after Turkey activated the EU Civil Protection Mechanism on Sunday. “The EU stands in full solidarity with Turkey at this very difficult time,” the EU said in a statement. Amid the ongoing fires, Turkey has experienced “unplanned” wide-scale power outages on Monday in at least 14 big cities including Istanbul, the capital Ankara, and Izmir. The Energy and Natural Resources Ministry said in a written statement that partial interruptions occurred because of high demand for electricity prompted by high temperatures.