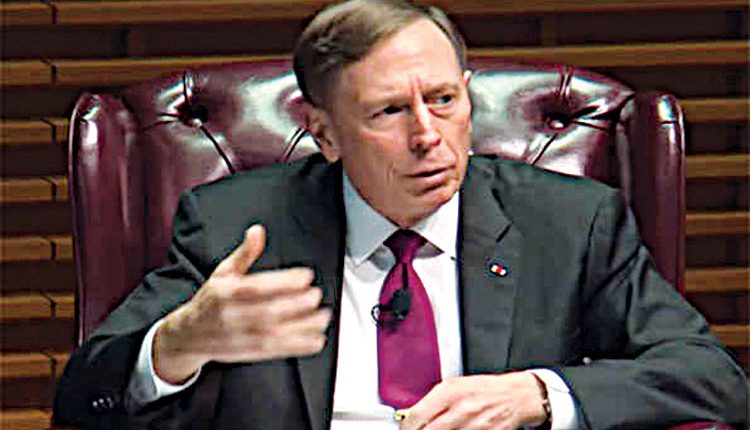 Kabul, Aug 2 (FN Agency) As intense fighting continued between a rapidly advancing Taliban and the Afghan army, Gen. David Petraeus, the former US commander in Afghanistan, has said that America has deserted its responsibility to protect the rights and freedoms in the country. In an interview to The Times, Petraeus has warned that a “medieval Islamist regime” and the return of terror-training safe havens are a realistic possibility now with the rapid advance of the Taliban across the country and takeover of territories that were until recently defended by US-led coalition troops. Tens of thousands of Afghans have already started fleeing their homes as the Taliban have started getting closer to Kandahar, the country’s second city. “The rest of the world will see that we are not supporting democracy or maintaining the values that we promote around the world — human rights, particularly women’s rights, the right to education and freedom of speech and press — all very imperfect in Afghanistan, to be sure, but vastly better than if the Taliban reinstates a medieval Islamist regime,” Petraeus said.

His remarks came as clashes intensified in Herat, in western Afghanistan, with the Taliban advancing closer to the central parts of the city. “The worst-case scenario is we could see a bloody, brutal civil war similar to that of the 1990s when the Taliban prevailed,” said Petraeus, who is also former head of the CIA. Petraeus said he is shocked by how Washington is closing down its military operations in Afghanistan. “If we had shown the determination and will to stay, we would have been in a much stronger negotiating position with the Taliban. But if we tell the enemy we are going to leave, why would they give up anything? “I am a little bit unclear why we didn’t think we could maintain 3,500 troops to stop the Taliban from bringing back an ultraconservative Islamist theocracy, which is not in anyone’s interest.” Petraeus added: “We forced the Afghan government to release thousands of Taliban prisoners, and got little or nothing for it. But if we had 3,500 troops there to maintain situational awareness and help our Afghan partners, we would have been in a position to prevent the Taliban from bringing civil war to the country.”
His remarks come as Afghanistan President Ashraf Ghani said the country’s deteriorating situation in the face of the Taliban’s advancements is due to the “sudden” decision of the United States to withdraw its troops. In a speech to the Afghan parliament, Ghani said, “The current situation is due to a sudden decision on the withdrawal of the international troops…We have had an unexpected situation in the last three months.” Meanwhile, the Biden administration has announced that thousands of Afghans who may be targets of Taliban violence due to US affiliations but are ineligible for a Special Immigrant Visa (SIV) will have the opportunity to resettle as refugees in the United States. “In light of increased levels of Taliban violence, the US government is working to provide certain Afghans, including those who worked with the United States, the opportunity for refugee resettlement to the United States,” the State Department said in the announcement.