Fight for saving PSBs is a fight to save our Nation 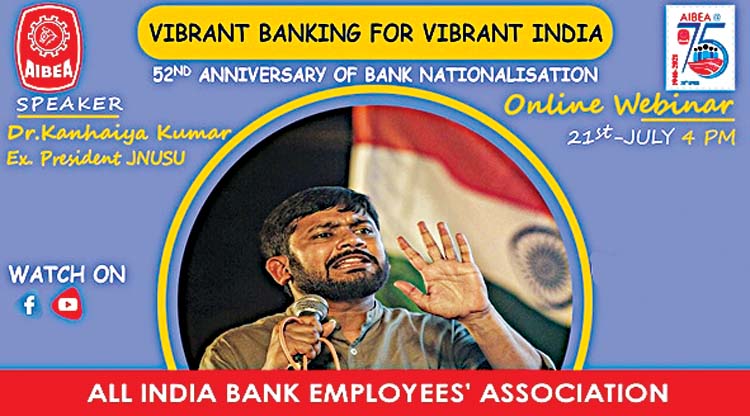 Hyderabad, Jul 22 (Representative) Launching a frontal attack on the BJP-led National Democratic Alliance (NDA) government for its policy of privatisation of Public Sector Banks (PSBs) former President of Jawaharlal Nehru University (JNU) Students Union Dr Kanhaiya Kumar said the Bank employees’ fight against privatization is fight not only to save the banks but to save the nation. In the process of privatisation, the common man will suffer, he said while delivering his lecture on the ‘challenges before the youth on account of privatisation policies’ on the 21st day of the month-long AIBEA National Webinars to commemorate the 52nd anniversary of Bank Nationalisation on theme ‘Vibrant Banking for Vibrant India’ and focus ‘people’s money for people’s Welfare’, on Wednesday evening. Dr Kumar said that even though one is not an economist, one cannot dissociate from issues like privatisation of banks or the various other decisions that are being taken by the present government at the Centre.

Privatisation is not an issue that can be viewed separately but it relates to economics, he said. He stated that ”handful of Corporates are looting the PSBs for which the common man is required to pay the cost in the form of reduction in interest rates on deposits, levying of service charges, which should be exposed”. Dr Kumar, also the All India Students Federation National Leader stated that privatization in Education, Health has miserably failed. Private sector health system during the period of pandemic is badly exposed and same thing will repeat in case of banking. The former President of JNU students union admitted that Public Sector Banks are facing problems but solution to the problem cannot be dismantling of it, instead the Modi government should address crux of the issue, that is mounting Non-Performing Assets (NPAs) which should deal with all seriousness.

India to dismantle barriers to investment, trade: US