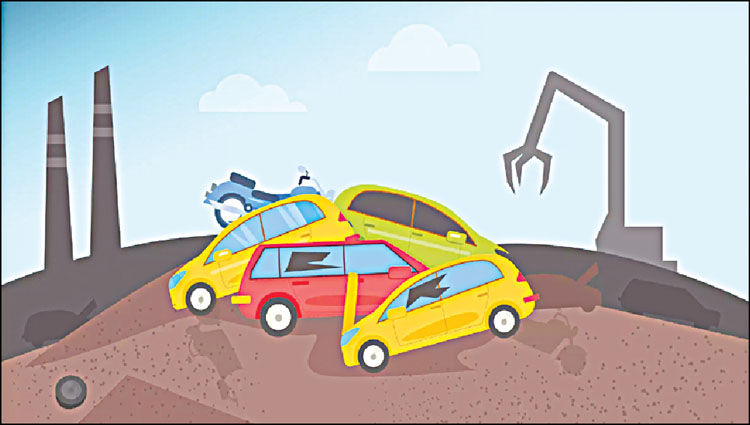 New Delhi, Apr 5 (Agency) The Union Road Transport and Highways ministry, as part of its plan to set-up 75 vehicle fitness centres across the country by March 2023, is considering rolling out new vehicle scrappage policy to phase out old polluting vehicles in a phased manner. Under the new policy, the road ministry along with state governments has set up fitness centres in seven cities. According to sources in the road ministry, the first of the seven Vehicle Inspection and Certification Centres have been set up at Jhuljhuli in Delhi, Rohtak in Haryana, Lucknow in Uttar Pradesh, Surat in Gujarat, Cuttack in Odisha, Nashik in Maharashtra, and Bengaluru in Karnataka.

As part of the scrappage policy, announced in March, the Central government plans to set up fitness centres across the country, where vehicles will undergo emission, braking and safety equipment tests. These centres will be set up on a public private partnership (PPP) basis. According to moneycontrol.com report, the vehicles that fail the test will be regarded as dead. Additionally, vehicles that are older than 15 years will be mandatorily de-registered. Meanwhile, the old vehicles scrap value is likely to be set at 4 to 6 percent of the ex-showroom price of a new vehicle. The report also cited that scrapping of government and government-owned vehicles which are more than 15 years old will start from April 1, 2022. And it is estimated that each scrappage centre will cost around Rs 18 crore, if the land is leased. While the cost may spike up to Rs 33 crore, if the land is purchased.

Under the new vehicle scrappage policy, private, commercial and government vehicles would be required to undergo mandatory fitness tests. It is aimed at reducing pollution and providing a spurt to the automobile sector. The road ministry in 2018 had proposed to make vehicle scrapping mandatory last year onwards. However, they had to put the proposal on hold after the Prime Minister’s Office (PMO) made few suggestions such as – make the scheme voluntary, consult with states, among others. India has approximately 7 lakh trucks, buses and taxis that were manufactured before December 31, 2000. There are over 5 million light motor vehicles (LMVs) which are older than 20 years, and around 3.4 million LMVs which are older than 15 years and are plying across the country without a valid fitness certificate.