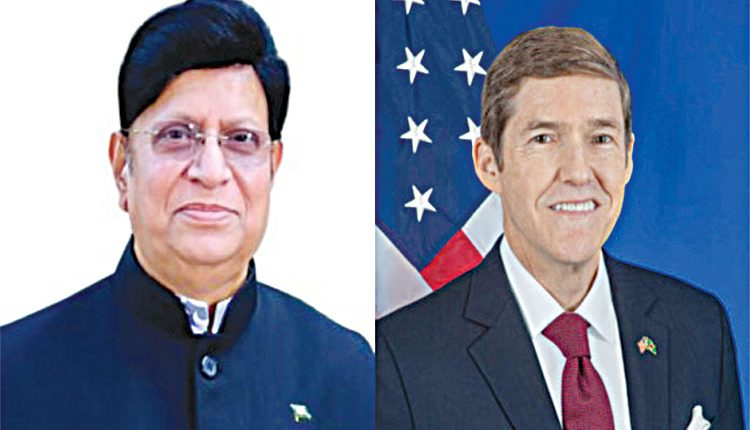 Dhaka, Mar 11 (FN Representative) The Ambassador of the United States in Bangladesh Earl R Miller called on Bangladesh Foreign Minister Dr A K Abdul Momen on Wednesday at the Ministry of Foreign Affairs. They discussed about Dr Momen’s recent visit to Washington DC in February 2021. Dr Momen termed his visit to the US as a successful one, and stated that he had a very fruitful discussion with US Secretary of State Antony Blinken. The US Ambassador also informed that he received good feedback from Washington about the meeting. Foreign Minister Dr, Momen also informed the Ambassador about his talks, during the visit, with US Special Envoy for Climate John Kerry, UN Secretary General Antonio Guterres and five US lawmakers; and about his participation in three events organized by the US Chambers, Newlines Institute and the Council on Foreign Relations (CFR) respectively.

He recalled that he requested the US Secretary of State to appoint a Special Envoy for the Rohingyas, in order to monitor and put pressure on Myanmar to ensure their safe and dignified repatriation back to their country. He urged the US lawmakers to support this idea and demand the same. Dr Momen also called for suspension of GSP facility and imposition of economic sanctions on Myanmar by the US. He also reiterated, Bangladesh’s strong expectation that the US Administration would facilitate the deportation of Rashed Chowdhury, the convicted killer of the Father of the Nation Bangabandhu Sheikh Mujibur Rahman soon. Bangladesh Foreign Minister also called for legalization of undocumented Bangladeshis in the US during his meetings with US lawmakers. He sought US cooperation for introducing more renewable energy in Bangladesh, specially by promoting electric vehicles.

During the meeting with the US Chambers, Foreign Minister Dr Momen asked for a three-year moratorium on US tariff on Bangladesh’s exports, and also proposed that Bangladeshi readymade garments can be exempted from tariff in exchange of fulfilling the condition of using US cotton. He and US Special Envoy Jon Kerry agreed to continue close collaboration between the two countries in the area of climate change. Bangladesh Foreign Minister invited US Secretary of State to visit Bangladesh this year to participate in the celebration of the Birth Centenary of the Father of the Nation and the Golden Jubilee of our independence. He also invited him to visit the Rohingya camps and witness the socio-economic development Bangladesh has achieved. He also invited the US lawmakers to visit Bangladesh in a group in near future. He also informed the US Ambassador about his attending a ceremony in Bangladeshi-owned university during his visit.

Ambassador Miller informed that a high-level dignitary from the US Government is likely to visit Bangladesh in the near future to attend the year-long celebration of Bangladesh’s Golden Jubliee celebrations. He also stated that there is a possibility of receiving a video message from the US leadership on the occasion of the upcoming 10-day long celebration this month. The US Ambassador expressed willingness to work closely with Bangladesh’s government to follow up on the discussion that Dr Momen had in Washington DC with his counterpart and other high dignitaries. Both sides also expressed satisfaction about the upcoming launching of the US-Bangladesh Business Council this month.