Speed, scale have to be increased to boost manufacturing 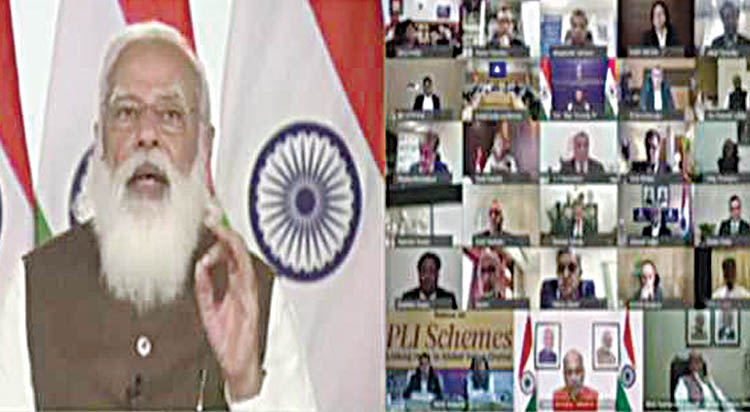 New Delhi, Mar 5 (FN Bureau) Prime Minister Narendra Modi on Friday said speed and scale have to be increased to boost manufacturing. Addressing a webinar on Production Linked Incentives scheme organised by Department for Promotion of Industry and International Trade and NITI Aayog through video conference, Mr Modi spoke on the steps taken to boost trade and industry in this year’s Union Budget. The Prime Minister said that over the past 6-7 years, several successful efforts have been made to encourage Make in India at different levels. He stressed on the need to take a big leap, increase the speed and scale to boost manufacturing. The Prime Minister cited examples around the world where countries have accelerated the development of the country by increasing their manufacturing capacities. He said increasing manufacturing capacities would increase Employment Generation in the country proportionally.

Addressing the webinar, the Prime Minister said the Government’s thinking is clear – Minimum Government, Maximum Governance and expects Zero Effect, Zero Defect. He said the Government is working at every level to promote the industry like Ease of Doing Business, reducing the compliance burden, creating multimodal infrastructure to reduce logistics costs, constructing district level export hubs. Mr Modi said the government believes that government interference in everything creates more problems rather than solutions. Therefore, Self-Regulation, Self-Attesting, Self-Certification are being emphasised. He emphasised the need to make Indian companies and manufacturing being done in India, globally competitive and also, to create global recognition for ‘our production cost, products, quality and efficiency’. ‘We have to attract cutting edge technology and maximum investment in the sectors related to our core competency,’ he said. Underlining the difference between the earlier schemes and the schemes of the current government, the Prime Minister said, earlier, industrial Incentives used to be open ended input based subsidies, now they have been made targeted and performance based through a competitive process.

The Prime Minister said 13 sectors have been brought under Production Linked Incentives for the first time. PLI benefits the entire ecosystem associated with the sector. With PLI in auto and pharma, there will be very less foreign dependence related to auto parts, medical equipment and raw materials of medicines. He added that the energy sector will be modernised in the country with the help of Advanced Cell Batteries, Solar PV modules and Specialty Steel. Similarly, the PLI for the textile and food processing sector will benefit the entire agriculture sector.

The Prime Minister remarked that it is a matter of pride that following India’s proposal, the United Nations has declared the year 2023 as the International Year of Millets. He said more than 70 countries came to support India’s proposal and unanimously accepted it in the UN General Assembly. The Prime Minister said this is also a big opportunity for ‘our farmers’. He urged to start a worldwide campaign in 2023 on the nutritional potential of millets or coarse grains to protect people from getting sick. Mr Modi said the demand for millets at home and abroad will increase rapidly with the announcement of the International Year of Millets by the UN in 2023 and this will greatly benefit ‘our farmers’. He also urged the Agriculture and Food Processing Sector to take full advantage of this opportunity.

Not just BP, other factors should be considered where heart diseases are rising