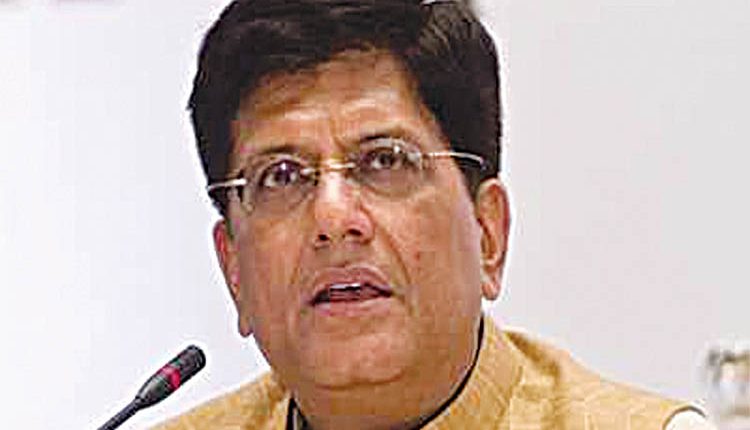 New Delhi, Feb 18 (Mayank Nigam) The government currently has no proposal to hike the prices of foodgrains sold through ration shops under the National Food Security Act (NFSA), Union Food Minister Piyush Goyal said on Thursday. Currently, the government supplies highly subsidised foodgrains at Rs 1-3 per kg to over 81 crore people through public distribution system (PDS). Under the NFSA, which was passed in 2013 during the previous UPA regime, there is a provision for revision of the issue prices of foodgrains every three years.

However, foodgrains prices have not been revised since the introduction of the Act although economic cost has increased every year. ‘At present, there is no such proposal before the food ministry to increase the prices of products given under the Food Security Act,’ Goyal said in a virtual press conference. And, the PDS prices of rice, wheat and coarse grains will continue to be sold at Rs 3, Rs 2 and Re 1 per kg, respectively, he said. The minister was responding to a query if the Centre has plans to hike the PDS rates as the Economic Survey 2021 has recommended increasing the prices of foodgrains sold under PDS to reduce food security bill. The government supplies 5 kg of subsidised foodgrains to each person per month through 5.5 lakh ration shops. NFSA has been rolled out across the country since November 2016.

On the progress made in ration card portability, the minister said the work in this regard under the scheme ‘One Nation, One Ration Card (ONORC)’ began two years ago and today, the facility is available in 32 states and Union Territories. Under the ONORC plan, beneficiaries can lift their entitled foodgrains from any electronic point of sale device (ePoS)-enabled fair price shops of their choice by using their existing ration cards with biometric authentication. Goyal said, ‘Two years back, the work had begun when it was implemented in four states. In a short span of time, this facility has now been provided in 32 states/UTs covering about 69 crore beneficiaries.’

About 1.5 crore beneficiaries are taking advantage of the ration card portability facility, he added. Stating that four more states are expected to implement the ONORC by March 31, Goyal said, ‘The speedy work is in progress in Delhi, Assam, Chhattisgarh and West Bengal. Due to elections in Assam and West Bengal, there might be some delay of 2-3 months.’ The central government is in regular touch with the rest of the states where ration card portability is yet to be implemented and encouraging them to put necessary systems in place, he added. To ensure seamless service of ration card portability, a food ministry official said all ration cards given under the NFSA have been fully digitalised, Aadhaar seeding has been completed in 91 per cent of the ration cards and ePoS machines have installed in 4.9 lakh ration shops so far.

On a monthly basis, 70 per cent biometric transactions are happening at ration shops, he added. On foodgrains procurement, the minister said there has been a substantial rise in wheat and paddy buying at minimum support price (MSP) directly from farmers in the past seven years. During 2020-21, the MSP payment was at ‘all-time high’ as Rs 75,000 crore worth of wheat was purchased from 43.46 lakh farmers, while Rs 1.72 lakh crore worth of paddy from 1.54 crore farmers, he added. To ensure MSP reaches farmers, a senior food ministry official said states have been directed to make online payment via state or FCI portals. Even Haryana and Punjab have been asked to ensure online payments to farmers are done through e-mode from the upcoming season, he added. That apart, procurement through bio-authentication of farmers has been introduced in Uttar Pradesh. Odisha, Chhattisgarh and Madhya Pradesh are also keen to adopt bio-authenticated procurement which will ensure transparency and tracking end-use beneficiary. The ministry is also looking at monetisation of assets of the Food Corporation of India (FCI) and the Central Warehousing Corporation (CWC), which will lead to large investments in modernisation of warehousing and storage infrastructure, he added.