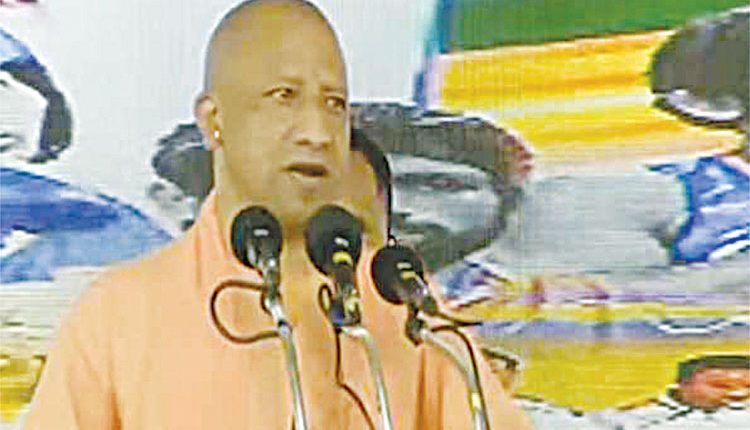 Lucknow, Aug 19 (Representative) Uttar Pradesh governor Anandiben Patel and chief minister Yogi Adityanath on Thursday honoured the Tokyo Olympic medal winners and participants at a glittering function held at Bharat Ratna Atal Bihari Vajpayee Ekana stadium here on Thursday. Chief minister Yogi Adityanath said UP government will adopt two sports and for the next ten years with one game being wrestling. The UP government will bear all the players associated with this game and the entire cost of other events, he said while saying that the name of the second game would be announced later on. “Will start wrestling academy in Lucknow and will appoint UP players who have won medals in international competition as DSP in UP police,” he said.

He also announced that the daily diet of the players preparing in UP will be Rs 375 while 150 new coaches will be recruited. “Will give 25 lakhs instead of 5 lakhs to the winner of any medal in international competition. Similarly, it has been decided to give more cash prizes to the players winning in any competition including Asian, National Junior State, Junior National”, he said. CM said “UP is the land of Kumbh, and after Prayagraj Kumbh, we are honoring all the players and winners who participated in the Kumbh of the game.” “The player plays for the country, and in front of him there is nothing but the country, with this motivation the player is able to perform well,” he said adding that Prime Minister Narendra Modi has too said that talent should be respected. “India has done the best this time that is why we have gathered to encourage the players. Salute all the players,” he said. The government distributed Rs 42 crores as cash awards to the medal winners including Rs 2 crore to Neeraj Chopra. Gold medalist Neeraj Chopra thanked CM for the honour. “This programme is a big event and it depict the entire country. Those who are sitting in front today will also win medals tomorrow,” the CM said.

Rani Rampal, Captain, Women’s Hockey Team said even after losing 3 matches in the Olympics, we did not give up hope and tried to reach the semi-finals. “Thanks to Yogi Adityanath. UP is the first state which has respected not only the players of its state but all the participants,” she said. Lalit Upadhyay, Indian hockey team player from UP thanked Chief Minister and the entire people of the state for supporting him. “When we get support from our state, our courage grows.Before going to the Olympics, the Chief Minister had said that if there is any need, he will hive us. Government supported sports and sportspersons, Lalit said. Indian hockey player Manpreet Singh said no other state has given the players as much love as UP is giving. “There were many ups and downs in the Olympics. We lost a few matches but then came back. Disappointed with the loss in the semi-finals. But the Prime Minister’s phone call increased the enthusiasm,” he said. Assam’s silver medalist Lovleena said “If we believe in ourselves then we can achieve success. Many medals will come in of UP too.” Wrestler Bajrang Punia said thanks to the Chief Minister for doing such a good program for the players. The President of Wrestling Federation K Braj Bhushan Sharan Singh is from UP. They also have a big hand in the success of the wrestler, Punia said.