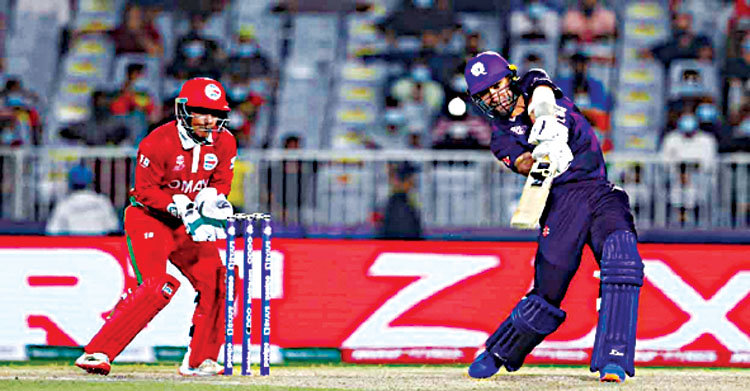 Muscat, Oct 21(Agency) With the help of skipper Kyle Coetzer’s knock of 41 runs, well supported by Richie Berrington (and Matthew Cross) , Scotland defeated Oman by eight wickets while chasing 123 runs in a crucial Group B match of T20 World Cup’s first-round here on Thursday. The victory sealed Scotland’s berth in the Super 12 stage, along with Bangladesh, as the side topped the group with three wins in as many games while pushing Oman out of the race.

The star performer for the Scotsmen turned out to be Josh Davey, who dismissed three Oman batters while conceding 25 runs in 4 overs. It was because of his superb bowling figures, backed by Safyaan Sharif (2/25), the hosts were bowled out at 122 in 20 overs. Chasing the total, Scotland were right on the money with openers George Munsey and Coetzer firing 28 runs in the first four overs. However, Munsey couldn’t capitalise on a good start and fell at 20 runs (19 balls) after failing to clear the deep boundary off Fayyaz Butt’s delivery.

Coetzer, however, kept the chase on track by adding 42 runs for the second wicket with Cross, who contributed a steady 35-ball 26 from the other end. The skipper fell in the 10th over to Khawar Ali, whose delivery bowled him after taking an inside edge of the bat. Newly-in Berrington (31* off 21) ensured no further harm came Scotland’s way and shot a boundary and three sixes to seal the win during an unbeaten 48-run partnership with Cross.

Per passenger non-aero yield of Indian private airports less than one-fourth of Singapore’s US$ 16.4