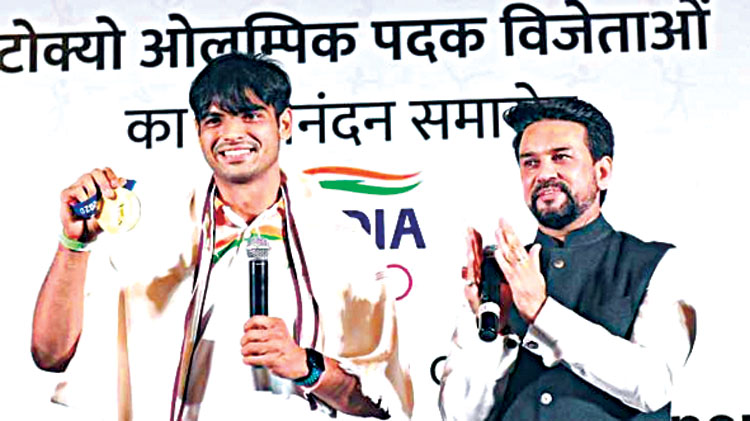 Gold medalist Neeraj, silver medalist Ravi, bronze medalists Bajrang, Lovlina and Manpreet returned to India today after gracing the closing ceremony of Tokyo Games 2020 last night. Speaking on the occasion, Sports Minister Anurag Thakur said, “Tokyo 2020 was an Olympic Games of many firsts for India. The success of Team India at the Olympics is a reflection of how New India desires and aspires to dominate the world…even in sports. The Olympic Games showed us that with self-discipline and dedication we can be champions.

Team India excelled and inspired while Indians cheered and celebrated all around. Truly sports is a great unifier as our athletes come from villages and cities, north to south, from east to west. Their journey is an incredible story of resilience and sporting excellence.” Kiren Rijiju praised the performances of all the athletes and reiterated that India will be a force to reckon with by the 2028 Olympics. “I am thrilled beyond words to share this space with our champion athletes today. This is a historic event with India registering its best ever performance in the Olympics. We have much to be proud of, we have a hockey medal after 41 years and a first-ever gold in athletics. And it’s not just our medal winners, each athlete has put their best in Tokyo and I congratulate all of them. This is just the beginning because India’s resurgence in sport is visible now and I am confident that by 2028 Olympics India will be a force to reckon with,” Mr Rijiju said. Nisith Pramanik lauded performance of the Indian athletes in the Tokyo Olympics and said, you have made India proud. Congratulating all the medal winners, Mr Pramanik added that Indian contingent has won 7 medals in the Tokyo Olympics, highest so far in any Olympics. It is an historic and memorable event which will be a great source of inspiration for the coming generation to take up competitive sports and do India proud.