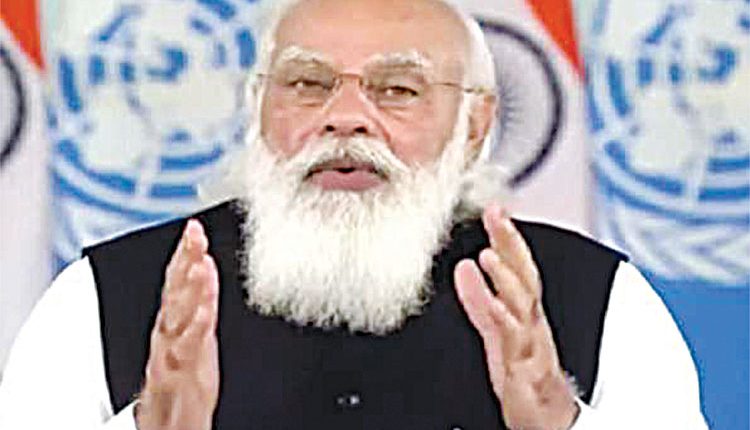 New Delhi, Aug 9 (FN Bureau) Prime Minister Narendra Modi highlighted the need for removal of barriers to international maritime trade, for settlement of maritime disputes peacefully and according to international laws, and on the need for “responsible maritime connectivity” infrastructure projects keeping in mind “the fiscal sustainability and absorption capacity of nations”, as he called for evolving a global framework on enhancing maritime security. Chairing the Open Debate at the UN Security Council on the topic ‘Enhancing Maritime Security – A Case for International Cooperation’, with India holding the month-long presidency of the 15-member global body, Prime Minister Modi also highlighted India’s vision of SAGAR – Security, And Growth for All in the Region. In remarks apparently aimed at China, whose hegemonistic activities in the South China Sea and increasing assertiveness in the Indian Ocean have caused concern among nations, including India, Modi called for a global framework to conserve and utilize the shared maritime resources, and outlined five principles, including removing barriers to maritime trade.

With China’s debt-trap diplomacy having entrapped Sri Lanka into giving away Hambantota port on a 99-year lease to Beijing, and Pakistan similarly signing off its Gwadar port to China for 40 years, and many African nations also caught in Beijing’s debt-trap diplomacy, Modi’s remarks are significant. The five principles outlined by him are: Firstly, removal of barriers to maritime trade, and he warned that any hurdles to this can pose a challenge to the global economy. He said: “We should remove barriers to maritime trade, the prosperity of all nations depends on the proper flow of maritime trade. Any hurdles to this can pose a challenge to the global economy. Free maritime trade is closely linked to India’s ancient heritage. Thousands of years ago the Lothal port in Sindh was linked to maritime trade; the ancient maritime routes were used to spread the message of peace of Lord Buddha. “In today’s context, based on this open and inclusive ethos we outlined SAGAR – Security, and Growth for All in the Region. Based on this vision, we would like to create in our region an inclusive framework.

To combat piracy, the Indian navy has been patrolling the Indian Ocean since 2008. India’s White Shipping Information Fusion Centre is raising awareness in the maritime domain in our area. “We have provided many countries with hydrography survey support and maritime security training. Our role is that of a net security provider in the Indian Ocean.” The fourth point he outlined was on the need to protect maritime resources and the maritime environment as oceans have a direct impact on the climate. “We have to protect our maritime resource and maritime environment, as we know oceans have a direct impact on climate. That is why we have to protect our maritime environment from plastics and oil spills, and take concrete steps against overfishing and maritime poaching. Alongside we should build cooperation in ocean science. India has launched an ambitious Deep Ocean Mission. We have taken steps towards sustainable fishing.” Fifthly, he spoke of the need to “encourage responsible maritime connectivity”. “We have to encourage responsible maritime connectivity. It is clear that to boost maritime trade building infrastructure is necessary. But in the building of such infrastructure projects, we have to keep in mind the fiscal sustainability and absorption capacity of nations.