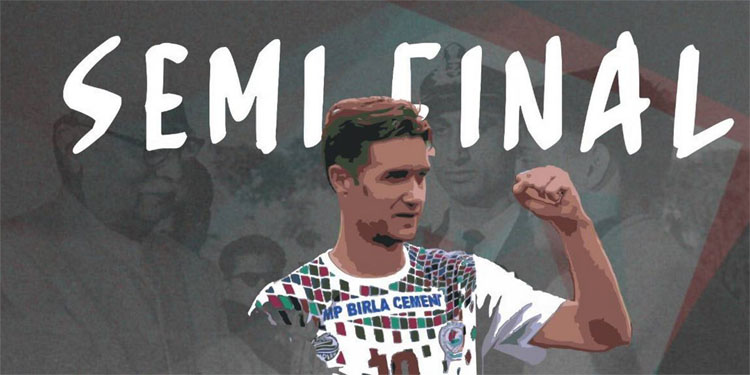 Kolkata, Dec 7 (Agency) In a must-win game for both of the teams traditional rivals Mohun Bagan rode on Anurag Tiwary’s four-for and Vivek Singh’s quickfire half-century to defeat East Bengal once again in Bengal T20 Challenge by 36 runs to make two derby wins in a row and booked their place in the semifinals on Sunday at Eden Gardens. With this win Bagan joined Tapan Memorial and Town Club in the semifinals while the fourth spot is yet to be decided.

An elated Bagan skipper Anustup Majumder said to CAB Media: “I am very happy, everyone has played so well to help our team win. We have played very good cricket for last three matches and don’t think any other team have played this quality of cricket. Two derby wins are obviously special for me and the whole team.” East Bengal won the toss and elected to bowl first. Vivek gave Mohun Bagan a solid start with a 35-ball 58 while skipper Anustup Majumder continued his superb to smash a quickfire 44 (28) to post 152/7 in their quota of 20 overs. East Bengal spinners Sujit Kr Yadav (3-34) and Akash Pandey (2-20) shared 5 wickets between them. East Bengal got off to a steady start as their opening duo Abhimanyu Easwaran and Shreevats Goswami stiched a 46-run partnership but after that no EB batter could stick around long with the Bengal skipper as he fought a lone battle with a 41-ball 55. Bagan bowlers kept things tight with disciplined bowling and fielding while Anurag bagged 4 wickets leaking just 27 runs to bundle East Bengal for 116 runs in 17.5 overs.