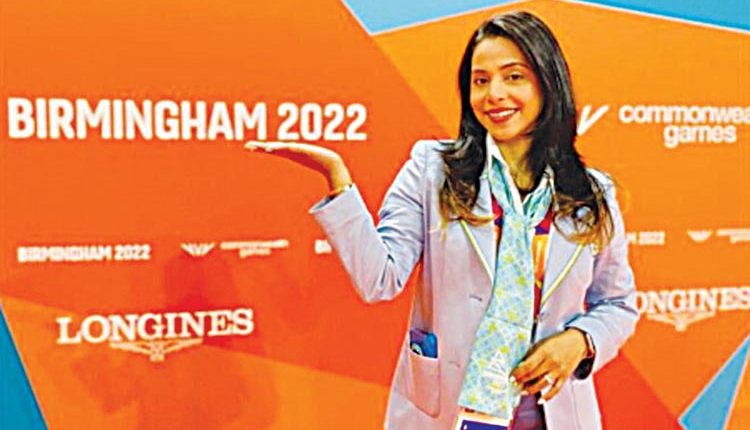 New Delhi, Aug 7 (Agency) The Commonwealth Games 2022 will take place in Birmingham, England. There is big news for India in the field of Gymnastics. Akshata Shete-Jadhav has become the only woman from India selected to Judge at the Commonwealth Games 2022. She will be seen officiating the Rhythmic Gymnastics discipline, which gets underway on 4th August. The 2010 Commonwealth Games in India was one of her first international tournaments as a player. Akshata represented the country at various international events, including the World Championships and FIG World Cup, captaining the Indian team at multiple tournaments. She has over 150 State and National Level medals. Akshata says, “From an athlete to being a Judge and judging the athletes, it feels like a dream. As a player, I used to wonder what goes on on the Judge’s panel, and today, when I sit with my colleagues from different countries, I realize the importance of a Judge during competitions. At the games, the Judges have to report one day before the competition for podium training, where we observe all the athletes get a feel of the competition. At the Judges panel, there is tremendous pressure to give correct judgement to every athlete as a result completely depends on us.” – Best wishes to Akshata from Team India. Akshata, like every other ordinary child, started gymnastics as an extracurricular at the age of five. Little did she know that this Sport would give her an identity, and with sheer dedication and hard work, she took up this Sport as a career.

She played her first tournament at seven and won her 1st medal, which motivated her to train for 5 to 6 hours a day. With rigorous training and dedication, she became the Junior Champion for three consecutive years and Senior Champion for five consecutive years from Maharashtra. She is recognized as an International and National champion from India. Akshata has to her credit herÂ ShivÂ Chhatrapati Award,Â 70 Gold medals, 60 Silver medals & 40 Bronze medals, Akshata is an Asian Gymnastics Union Technical Committee member and recently has been elected as a member of the Gymnastics Federation of India. She is the highest category Judge in India and has judged top tournaments internationally and on the national stage. The accomplished athlete continues to support the Sport as a coach to many upcoming talents. She founded the Bombay Physical Culture Association Rhythmic Club in Mumbai 10 years ago, famously recognized as one of the top clubs in Maharashtra. Her club trains more than 150 students who have won numerous District, State and National Competitions medals. She says, “I believe the knowledge gained must be shared. Gymnastics has taught me the importance of hard work, patience, losing, recovering, winning, and most of all, keep learning every day”. After the hardships I faced during my training, such as the lack of a coach with technical knowledge, a structured training system, and no correct infrastructure, I decided that no child would ever have to face such difficulties in achieving their dreams.

This Sport has grown from nothing to marking India’s name on the world map of Rhythmic Gymnastics through unimaginable struggle. India is bursting with talent, and it just needs structured guidance to shine at the International level and Olympics. In 2019, she came to Pune with the mission of developing gymnastics in this city filled with a hidden talent. This is how Flamingo Gymnastics School & Research Centre, Pune, was born. What Does Flamingo Gymnastics School Offer? FGS is a gymnastics school that offers training programs for children aged three years for Recreational and Competitive Gymnastics in a fun but structured way. Gymnastics is known as ‘The Mother of all Sports. It has also gotten recognition from The International Olympic Committee as one of the foundation sports from which all others stem. This is so as Gymnastics helps a child develop strength, flexibility, endurance, balance, coordination, etc. All classes offer a structured framework that includes yearly reports with feedback to parents, regular assessment of progress, and quarterly physical tests so that children get the chance to build character. What Are We Trying To Achieve: In India, it is often said that where there is infrastructure, there is no coach, and where there is a coach is no right infrastructure. We at FGS are implementing a structured training program, the right infrastructure, and standards required under the Federation guidelines. Initially, we want children to enjoy the training and let them experience this beautiful Olympic Sport in a structured but fun-filled environment. Those children who enjoy the Sport gradually start taking it seriously and eventually become champions. India is bursting with talent; with the right guidance and nurturing, and we believe we can change the face of Gymnastics in India.