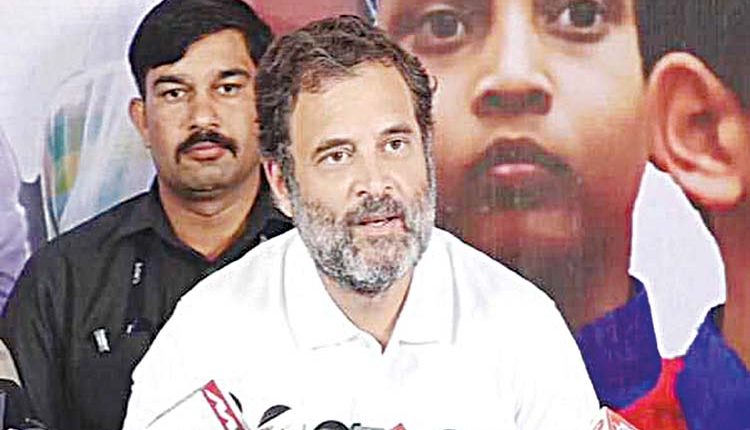 Tumukuru, Oct 8 (Representative) Countering BJP’s remarks that Congress was responsible for India’s Partition, former AICC President Rahul Gandhi on Saturday alleged that the Hindutva ideologue VD Savarkar used to get a stipend from the British. “In my understanding Savarkar used to get a stipend from the British and these are historical facts and these are not fact that the BJP can hide,” he told reporters in a press conference on the sidelines of Bharat Jodo Yatra here. He made this remark when he was asked to comment on BJP’s allegations holding Congress responsible for India’s Partition. Gandhi said it is interesting that such comments come out from the BJP which was nowhere to be found in the freedom struggle. “The party that fought for independence and created a mass movement for independence. The party that helps bring the Constitution. The party that brought the Green Revolution. That’s the Congress party,” he said.”And it is interesting that the BJP comes out with these comments, but if you look at the historical truth. The BJP were nowhere to be found in the freedom struggle, and the BJP is singularly dividing the nation and spreading hatred in this nation,” he said.

Spreading hatred and dividing the nation do not help the nation and that is why the Congress is on a Bharat Jodo Yatra, Gandhi scion said. He also stated that the people are tired of BJP’s “maladministration.” “I would also like to say to you that it is not just me doing the yatra, but lakhs and lakhs of people who are doing the Bharat Jodo Yatra. So, this is not just the expression of the Congress, but the expression of the people of India.”They are tired of the type of politics that’s being done. They are tired of the price rise. They are tired of unemployment and tired of the immense wealth that a few people enjoy,” he said. Based on these three points, Gandhi said that the Congress is going to win the election. On BJP’s charges that the AICC President-elect will be remote-controlled by the Gandhis, the Congress scion denied the allegations and said, “On this election both people who are standing (in the election) have a position and perspective, and they are people of stature and understanding.

So, I don’t think either of them is going to be a remote control. Frankly I think this tone is insulting to both of them,” he said.On the Karnataka CM issue, Gandhi said it will be decided after winning the 2023 Karnataka election. “We have a formidable team in Karnataka. We have leaders who are complimentary. Who are brilliant leaders, and once we win elections, the decision on who is going to be the chief minister is going to be taken through a process that is carried out in the Congress party,” he said. On BJP’s allegation that the Congress supports PFI and their affiliated outfits, Gandhi said the party will fight anybody, irrespective of any community that spreads hatred and violence in India. “My view is, and I have been saying it in speech after speech that it does not matter who the person spreading hatred in India is. It does not matter which community they come from. Whoever is spreading hatred and violence in India and indulging in anti-national acts, we will fight them,” he said.