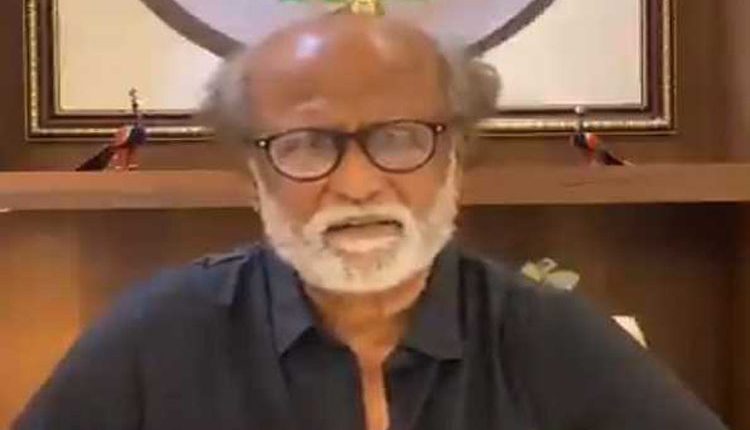 Chennai, Nov 29 (Bureau) Superstar Rajinikanth has called a meeting of his Rajini Makkal Mandram (RMM) office-bearers here tomorrow to decide on whether or not to enter politics and contest the Tamil Nadu Assembly elections due in 4-5 months time. The meeting would be held at his Ragavendra Kalyana Mandapam at 0900 hrs tomorrow meeting where the Mandram office-bearers were asked to come. After holding discussions, Rajini was expected to make an announcement on whether he will contest the Assembly polls or not.

The Rajini Makkal Mandram members were expecting a clear statement from him tomorrow. It may be recalled that Rajini had on the 2018 New year eve announced that he would entere politics, float a new party and contest all the 234 seats in the 2021 Assembly elections, while ruling out contesting the 2019 Lok Sabha polls. Since then, his fans were eagerly waiting for it, but Rajini was yet to start a party. In November last year, Rajini made a dramatic announcement that he was willing to work together with the long time friend and fellow actor-politician Kamal Haasan in the elections and said in the 2021 Assembly elections 100 per cent people would create a ‘very big mircale and wonder.’ He said ‘100 out of 100 per cent people will create a ‘very big miracle and wonder’ in the 2021 Assembly polls’. Asked on the debate who would be the Chief Minister if both of them come together for the Assembly polls, Rajini, said it would be decided at the time of elections. Rajini, who often used to make politically loaded statements, had also drew the ire of the ruling AIADMK in November last for his comments that Chief Minister Edappadi K Palaniswami surviving in power was a miracle. “Two years ago Mr Palaniswami might not even have dreamt of becoming Chief Minister. And they said, he would not last even for a few days. But, he had survived for more than two years. It is a miracle.’ ‘Miracles happened yesterday. It is happening today and might happen tomorrow,” he said, drawing the ire of the AIADMK leaders.

In December last year, RMM members were directed not to contest local body elections in Tamil Nadu and also not to campaign for any party or individual. Prior to this, Mr V M Sudhakaran, who co-ordinates the activities of RMM, said Rajini would not contest the civic polls and that he would not support any political party. In March this year, the possibility of Rajini taking the proverbial political plunge gained momentum when he came up with a three-point agenda, which included ruling himself out of the post of Chief Minister, wanted to separate party from the government by forming a council that would appoint a young and capable Chief Minister and supervise the functioning of the government, abolish thousands of party posts and induct youngsters into the party. In October, Rajini virtually dropped his political plans citing his health condition as he had underwent a kidney transplant and the prevailing COVID-9 pandemic. A letter, purportedly written by him created buzz in the social media. The actor said the letter in his name which claimed that he might not enter politics as promised on the 2018 New Year eve due to the COVID-19 pandemic and due to his health condition was not written by him. But he confirmed that the contents in it about his health condition was true. ‘As far as my political plans are concerned, a decision will be taken after consulting the RMM members. Rajini, while confirming his health issues and the doctor’s advice that meeting people and campaigning would put him at risk in the time of the COVID-19 pandemic, broadly hinted that he was not entering politics. In line with this announcement, he would be meeting RMM members tomorrow.