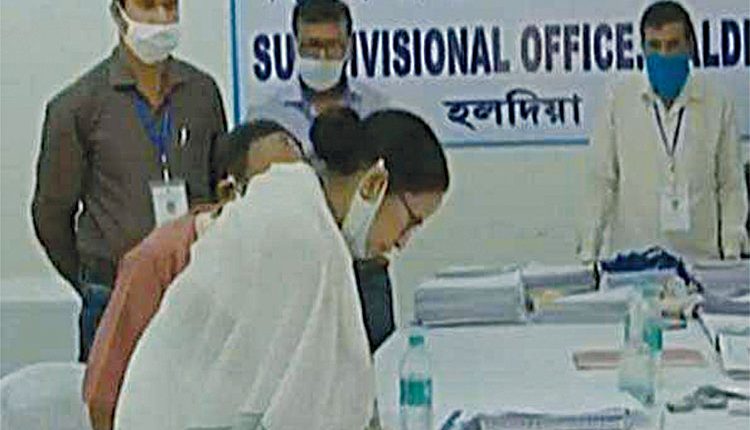 Nandigram, Mar 10 (FN Representative) West Bengal Chief Minister and Trinamool Congress (TMC) supremo Mamata Banerjee on Wednesday filed nomination from Nandigram assembly constituency. Before coming to the SDO office, Ms Banerjee offered prayer to the Lord Shiva temple and arrived at the SFO office with a road show in which thousands of her supporters chanted “Khela hobey Khela hobey”. The chief minister is pitted against her former confidante Suvendu Adhikari, who joined the BJP some time ago, in the high-profile Nandigram seat that will go to poll on April 1 in the second phase. Mr Adhikari will file his nomination papers from the Nandigram assembly constituency on March 12.

This was Ms Banerjee’s first visit to Nandigram after she announced her candidature for the Nandigram seat, dominated by the peasants, who fought against the Communist government’s acquisition of land for special economic zone in 2007, leading to their downfall four years later in 2011 assembly poll. She will be visiting various places in her constituency and hold meetings today. She will leave Nandigram tomorrow morning and release the party manifesto from her Kalighat residence at 2 pm as earlier scheduled. Carefully choosing Maha Shivratri to release the manifesto as part of Chief Minister Mamata Banerjee’s efforts to counter the BJP’s Hindutva card, sources say the manifesto will be a list of 10 commitments which the TMC will make. The TMC supremo, while talking to reporters, also said several welfare projects have been launched by her government in Nandigram over the past 10 years, “as is evident from the metalled roads, streetlights and bustling marketplaces, and more such work will be undertaken in the days to come”.

Meanwhile, TMC writes to State Chief Electoral Officer stating that they’ve received reports on ‘distribution of boxes of incense sticks & match boxes with BJP symbol & pics of top BJP leaders to devotees at temples in Shyampukur & Jorasanko’. TMC asks for strict action into the matter. On the other hand, branding Ms Banerjee as an outsider in Nandigram, BJP leader and her former protege Suvendu Adhikari on Wednesday asserted that people duped by chit fund companies in the state would get back their money if the saffron party is voted to power. Accusing TMC supremo of trying to divide communities on religious lines ahead of the assembly elections, Adhikari said the TMC supremo had “incorrectly” recited the ‘Chandipath’ (holy text) on Tuesday. Meanwhile, BJP announced a list of 40 Star Campaigners for West Bengal including Prime Minister Narendra Modi, Home Minister Amit Shah, Defence Minister Rajnath Singh, UP Chief Minister Yogi Adityanath, Suvendu Adhikari and Babul Supriyo and others . The Election Commission on Tuesday ordered the removal of Virendra as the Director-General of Police of poll-bound West Bengal with immediate effect and appointed 1987 batch-IPS officer P Nirajnayan in his place.