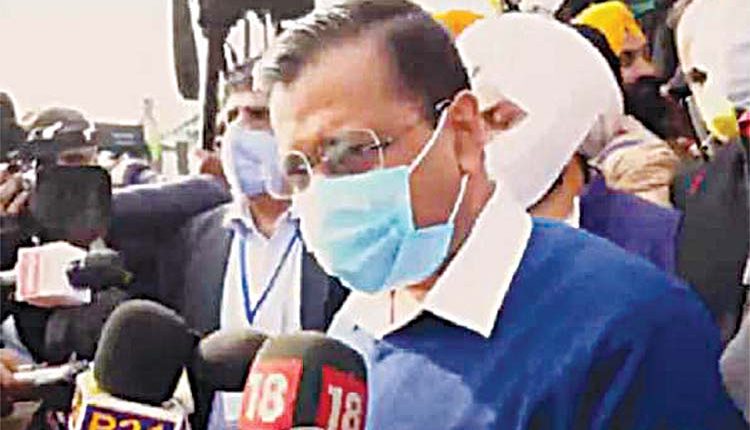 New Delhi, Dec 7 (Agency) Delhi Chief Minister Arvind Kejriwal on Monday met the farmers, who are protesting on the Delhi borders against three new farm laws, and said that his government supports all their demands. Farmers’ protest has entered day 12 on Monday as a deadlock between the Centre and farmers continues. The next round of talks between the farmers’ unions and the Centre is scheduled for December 9.

Mr Kejriwal, along with his cabinet ministers, reached the Singhu border (Delhi-Haryana border) to meet the farmers. He took stock of the facilities being provided there and said that his government is the ‘sewadaar’ of the farmers. Talking to mediapersons, the Delhi Chief Minister supported the demands of the farmers, and said, “My government is the ‘sewadaar’ of the farmers. The farmers’ issue and their demands are justified. I and my party stand with them.’ ‘At the time of the starting of farmers’ agitation, the Delhi Police had asked us for permission to convert the nine stadiums into jails. There was pressure on me but I did not give permission,’ he said. ‘Since then our party, all AAP MLAs, party workers have been serving the farmers by becoming ‘sewadaar’. I myself have come here as a ‘sewadaar’,’ he said.
Mr Kejriwal on Sunday announced that the Aam Aadmi Party supports the call for ‘Bharat Bandh’ by the farmers on December 8.

The AAP workers across the nation will extend their support to the Bandh on Tuesday in a peaceful manner, AAP supremo said taking to the micro blogging site twitter. The fifth round of talks between the Union Government and farmers’ representatives here on Saturday also ended in a stalemate with both sides agreeing to meet for the sixth round on December 9. Farmers leaders stuck to their demand of repeal of the three farm laws. They said they would go ahead with the December 8 Bharat Bandh announced earlier. The Centre on Saturday assured agitating farmers that the Minimum Support Price (MSP) of their agricultural produce would continue and there was no threat to it, asserting that the Union government is committed to their welfare.