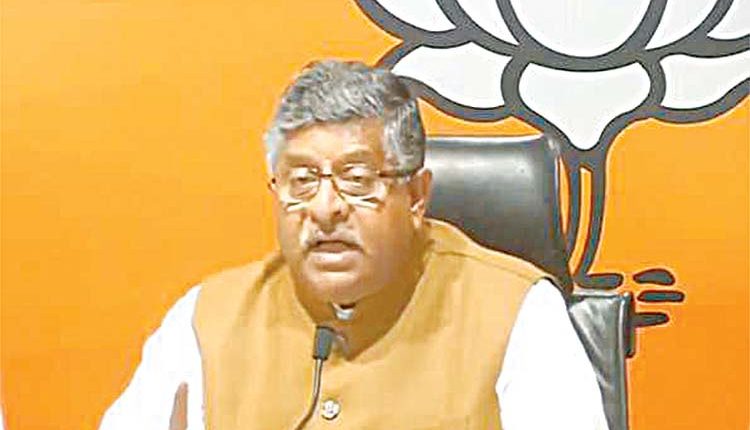 New Delhi, Dec 7 (Agency) The Bharatiya Janata Party (BJP) on Monday mounted an attack on the Congress and opposition parties, saying that the embarrassing ‘double standards’ of these political parties opposing laws made for agricultural reforms has come to the fore. Senior BJP leader and Union Minister Ravi Shankar Prasad told a press conference here that the provisions made by the Narendra Modi government on agricultural reforms were those which the Congress-led United Progressive Alliance (UPA) government was trying to do in the past 10 years.

“Opposition parties have jumped into the issue of new farm laws. During UPA rule, they did exactly what Modi government is doing today for reforms in the farm sector. Now that they are losing polls, they take part in any protest for the sake of their existence,” he said. He said “the political existence of the Opposition parties is coming to an end, so they are supporting any movement to protect themselves.” Mr Prasad said it was not just about the farmers’ movement but on the issue of Citizenship Amendment Bill, Shaheen Bagh or any reforms, the Opposition parties, including Congress, was supporting these protests. Reading out from the Congress’ 2019 Lok Sabha election manifesto, he pointed to page 17, point 11 wherein it was clearly stated that the Congress will amend the Agricultural Produce Market Committee (APMC) Act so that farmers were freed from all restrictions for the trade of crops. Mr Prasad said in 2013, after meeting with all Congress-ruled Chief Ministers, Congress leader Rahul Gandhi had said that they should bring changes in APMC. In 2010, Nationalist Congress Party leader and former Agriculture Minister Sharad Pawar wrote a letter to all Chief Ministers in this regard. He said, “On August 11, 2010, Mr Pawar wrote a letter to the then Delhi Chief Minister Sheila Dikshit and in November to the Chief Minister of Madhya Pradesh, Shivraj Chauhan, that the private sector is needed to increase the income of farmers and for this, changes in the mandi law are necessary.

Formula 2 Victory for Jehanfirst for an Indian