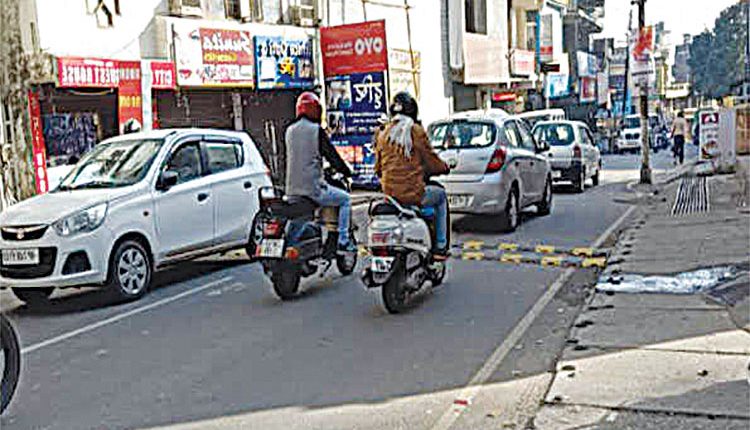 Hamirpur, Mar 9 (FN Representative) People of the Hamirpur town are highly upset and aggrieved over the way a number of speed breakers have been installed on the main road leading from Shimla to Dharamshala via Hamirpur. They lament that the height of the plastic-based speed breakers installed by the local division of the Public works department is much higher than the specifications and in fact they have become the bone breakers for those driving two-wheelers and light four-wheelers like cars and jeeps. Though there were complaints of over speeding by youngsters on the main road and perhaps it was the main reason that led the authorities to lay the speed breakers yet instead of tackling the real issue of the over speeding riders, they installed the speed breakers.

One of the eye witnesses told on Tuesday that a bike driver fell while moving at a fast pace as he was ignorant about the new speed breakers and was taken to his home in blooding condition after first aid at a local medical shop. Owners of the shops located on the bus stand area of the town through which the main road passes said that the new speed breakers must be removed and instead speed breakers that were installed earlier and were still installed on the road near the bus stand and the main police station should be installed and put to use. Vivek Sharma, the Executive Engineer of the Public works department, admitted having installed the speed breakers but added that he had received no complaints about their height and the problems being caused to the people from them.

On other hand, the local police authorities are also finding it difficult to tackle the traffic situation on this road as it was leading to a stoppage of the vehicle on the main road thereby causing hindrance in the smooth flow of the traffic. One of the traffic personnel on anonymity said that he would speak to his boss and officers of the Public works department to ensure that the height of the new speed breakers was curtailed or old type of speed breakers were installed. What will be the action of the authorities on this front no one knows but one thing is sure that if timely action is not taken to change the new speed breakers, the authorities will have to wait for the repeated accidents to occur and feel the pinch of the pain of the local people.