Cong to fight for the rights of PSUs workers and employees: Rahul 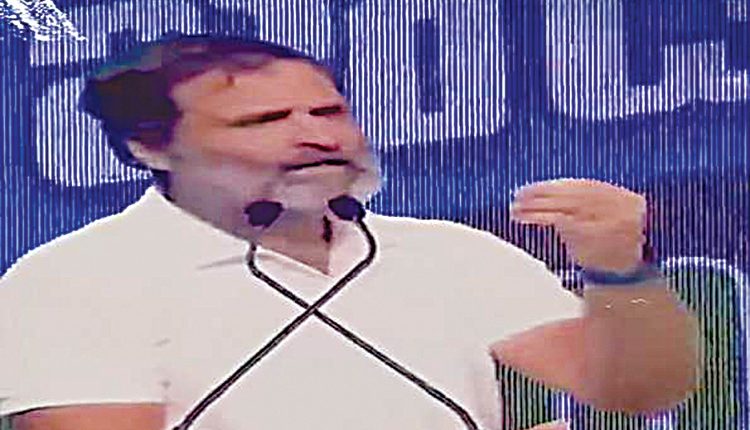 Hyderabad, Nov 3 (FN Agency) Congress MP, Rahul Gandhi on Wednesday evening assured that the Congress party will fight for the rights of workers and employees of Public Sector Units (PSUs) and won’t make these sectors private.Addressing at a street corner meeting during the ongoing his Bharat Jodo Yatra at Muthangi, outskirts of city here, Rahul said that all public sector management and employees are being scared of privatization and these public sector units are the assets of india but the BJP wants to give these public sector units to their friends. BJP won’t support BHEL and BDL later they are handed over to their friends, the Wayanad MP said that these PSUs are not any business assets, they are public assets. Today, ‘ I have spoken with BHEL, BEL and Bharat dynamics limited employees”, he said the BDL has introduced many missiles to the nation. When I spoke to BDL employees, I came to know that BJP created fear among the employees pretending to privatise BHEL and BDL. BJP is trying to give away India’s ports, airports, LIC, Telecom, pipelines to their friends, he said. It’s been 55-days but it feels like this yatra started today, Rahul said the aim of this yatra is to stand against the violence and hatred spreading in this country.

BJP and RSS are trying to spread the violence and hatred across the country. But their aim is not just spreading violence and hatred, but really aim is to create fear among the public of the country, he alleged and said that they want the public, youth, farmers and Government employees to have fear of BJP and RSS and to lend the country to their business partners. Everyone (Youth) keeps thinking that they won’t get a job anymore, this because of PM Modi he breaks the wheel of the economy of Telangana and India, he said that because of demonetisation, GST and by not supporting the small and medium enterprises, PM Modi destroyed the wheel of economy. Generally Governments, Public sector, small and medium enterprises and huge manufacturing companies and also construction companies provide employment to the youth in India, but Narendra Modi has hit two big blows to these enterprises through demonetization, he said.

The PM said demonetisation has hit the black money in the country, but in reality it has hit all the small and middle enterprises. Few enterprises sustained the demonization effect, they have been hit by false GST. Jeans enterprises in Bellary are examples of demonetisation and GST effect, more than 4.5 lakh have lost employment in Bellary, Rahul said.Nation has Modi and Telangana State has KCR (K.Chandrashekhar Rao),who follows the steps of Modi and acts accordingly, he said that KCR is learning from Modi how to destroy the State and he is grabbing their lands given by the congress government earlier. He browses the Dharani portal every day to know how much land he has looted from the Adivasis and poor people, the Congress MP said.. In Madhya Pradesh, BJP has bought our MLAs and destroyed the democratic government there, he said that KCR and Modi think similarly, they loot from people and share the money with friends and family. The both are scaring the people and media and suppressing the voices, he said this Yatra is to put a check to all these and unite India and bring a New India devoid of hatred, unemployment and poverty. This Yatra will be historical, I am getting support across sections and states and I am thankful to each and every one for this, he added.