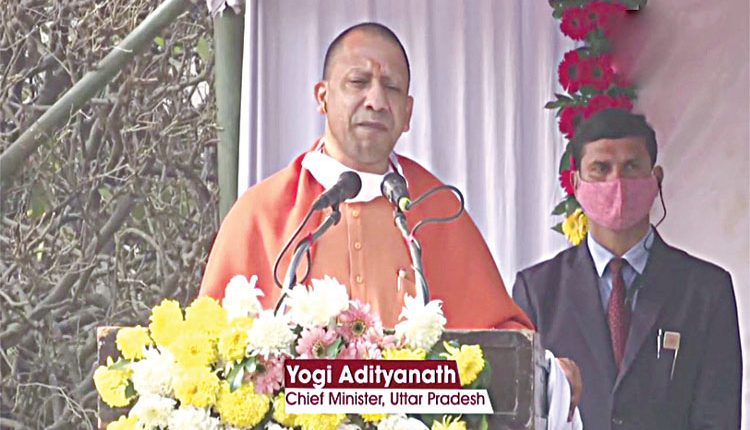 Lucknow, Jan 21(FN Agency)Uttar Pradesh Chief Minister Yogi Adityanath played guardian to 24 crore people of the state, expressed concern over road accidents, and issued a passionate appeal to follow all traffic rules. He said that the road accidents might have been decreased in recent years but about 65 people lose their lives every day in the state in road accidents. The CM, who launched the month-long campaign from his official residence on Thursday, said, “drunken driving, using mobile while driving, over speeding, not wearing a seat belt and such similar small mistakes result in road accidents and the entire family has to pay for the mistake of a single person.”

Insisting upon to keep vigil while driving or traversing through the roads, the CM said what it all required is to be alert, vigilant and aware of the traffic rules which could prevent thousands of children from becoming orphans and their families from being distressed. “Poor road engineering, high speeding and illegal cuts on expressways are also a big cause for road accidents. The concerned departments should pay special attention to these lags and this special campaign has been organised to spread awareness amongst people in the initial days and later those flaunting traffic rules will be penalised,” asserted the CM. Empasising on spreading awareness among school children during the road safety month, CM Yogi said that sense of traffic awareness and road safety should be instilled in them from the very beginning and by this, they would remain aware throughout their life. Special programmes should be held in schools regarding road safety and traffic rules. He directed to have nodal officer deployed in every district during the month, the qualification of the concerned person should be properly tested by the licensing authorities before issuing a driving license to him/her.

The CM also expressed hope that the campaign will help a lot in preventing road accidents. The CM also inaugurated and laid the foundation stone of various projects of the transport department worth Rs 55.70 crore. These included the construction of bus stations, automatic driving tracks, renovation works, etc., in different districts of the state. During the programme, the CM also administered the oath to the people to follow traffic rules and drive safely. “Every seventh person of the state is affected with the road accidents taking place in the country. Keeping this is mind, continuous efforts are being made to create awareness among the people about road safety and traffic rules,” Ashok Katariya, minister, transport (independent charge), said. An awareness rally was also flagged off by the CM and the pink patrol, emergency vehicles, LED vans, vintage vehicles and the transport department also participated in the rally. All the vehicles had messages requesting everyone to follow traffic rules. Through the rally, the people were also explained the importance of comply with the traffic rules and appealed to follow traffic rules.