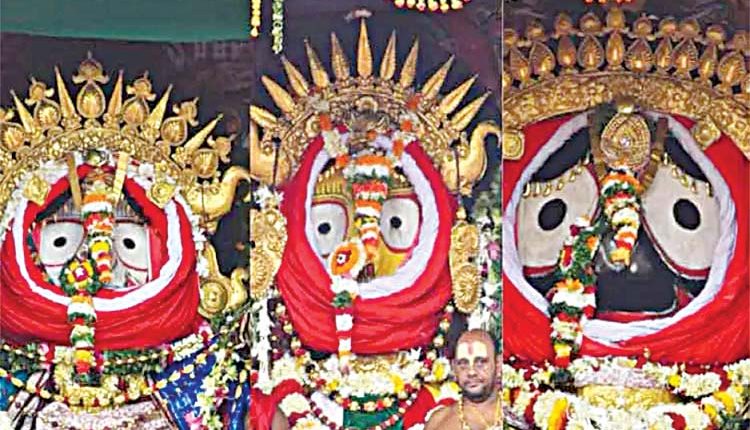 Puri, Jul 21 (FN Representative) On a rare occasion the three presiding deities of Sri Jagannath temple appeared in golden attire( Suna Vesha) on their respective chariots outside Lion’s gate today. Lord Jagannath, his elder brother Lord Balabhadra and their sister Devi Subhadra who returned from their nine-day sojourn from Gundicha temple to their original abode- Jagannath temple here yesterday appeared in their full form today wearing pure gold attire with their respective ‘ayudhas’. The three presiding deities were dressed in huge gold ornaments and jewellery by the servitors which are known as Suna vesha popularly called “Badachadhau Vesha”. According to the temple history in 1460 AD when the then Gajapati Kapilendra Dev returned victorious in his South expedition brought huge gold and jewellery and donated them to the lord. His minister Badachadhau Pattnaik advised the king to observe a Suna vesha of deities on chariots to facilitate Sunavesh darshan to devotees who were not allowed into the temple. The king granted the request and named this Suna vesha on his minister Badachadhau.

On Tuesday the three presiding deities reached Simhadwar of the main temple on their return journey from Gundicha temple in Bahuda yatra and spent the night on their chariots. Today early morning the priests performed Mangal arati, Mailum, Tadaplagi, Abakash, and offered Gopal bhog. Thereafter Sakaldhup was offered followed by Madhahna dhup. In the afternoon about 4 PM, the process for Sunabesh began. The Bhandar Mekap (assistant treasurer of temple) in presence of Pattajoshi Mahapatra, Deulakaran, Pratihari and temple police opened the Bahar Bhandar(outer treasury) and brought out ornaments and jewelleries of three deities kept in three separate boxes amid tight security. The gold ornaments were handed over to the servitors on the three chariots with an acknowledgement of the inventory they received.

Three separate sets of dressers called Simharies along with some senior Daita servitors dressed the deities in gold ornaments simultaneously. These apart the deities were given gold limbs like feet, hands, ear lobes and their insignias. While lord Jagannath has been fashioned with Sankha (conch) and chakra(wheel) on his both hands, Balabhadra with a gold plough. Because of pandemic restriction and imposition of curfew, there were no devotees on Badadanda to witness the Vesha. After about four hours of vesha, servitors will undo the vesha and return the ornaments as per the list they received to the temple treasury. Every year four sunaveshas were observed in the Garbhagriha on Dolapurnami, Kartik Purnima, Pousa pournami and on Bijaya Dashami (Dassera). As per the 1978 inventory of the ornaments in the Bahar Bhandar (outer treasury), there were 367 items of gold ornaments weighing 400 kilograms and silver ornaments about 14 quintals besides the rare size of precious jewels. The inner treasury was yet to be opened.