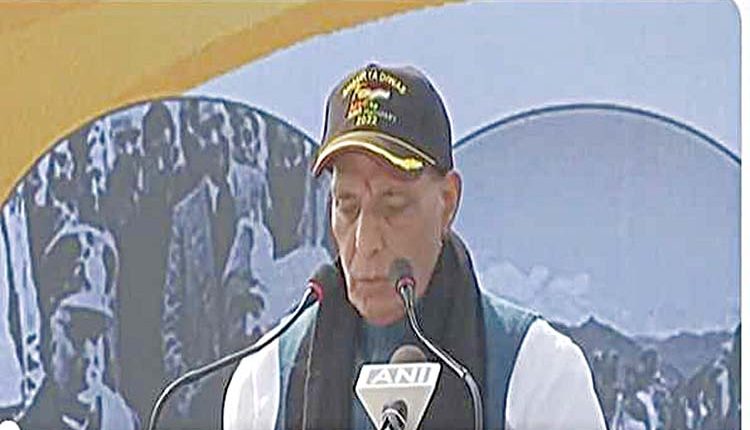 New Delhi, Oct 27 (FN Agency) Defence Minister Rajnath Singh on Thursday said the journey undertaken by the present government would be complete when they would take over Gilgit Baltistan and other parts of Pakistan Occupied Kashmir. He said Jammu and Kashmir is seeing new heights after the scraping of the special status which is just the beginning. “Jammu and Kashmir, and Ladakh are touching new heights of development one after the other.” But I would like to say here that we have just started the development of these areas. Now we have just started walking towards the north,” the defense minister said while speaking on the occasion of ‘Shaurya Diwas’ here. “Our journey will be completed only when we implement the resolution passed unanimously in the Indian Parliament on February 22, 1949, and accordingly we will reach our remaining parts, such as Gilgit and Baltistan and other parts,” he added.

Singh attended an event to mark Jammu and Kashmir’s accession to India and airlifting of Indian troops into J&K in 1947. The day is celebrated as “Shaurya Divas”. The defence minister said the journey will be completed only when the refugees of 1947 will get justice, when the land of their ancestors can be returned to them with respect. “I am fully convinced about the strength of the people here, and the strength of our armies, that the day is not far when all these mandates of ours will also be successfully fulfilled,” he said. Singh hit out at Pakistan for shedding crocodile tears in the name of human rights “I would like to pose this question to Pakistan, how many rights has it given to the people of our (PoK) areas which is in its unauthorized possession. “Pakistan, which sheds crocodile tears in the name of human rights, knows how much it cares for the people of these areas,” he said, adding that Pakistan was fully responsible for inhuman incidents. He said Pakistan was involved in atrocities on its people in PoK.Singh said J&K was a victim of politics and despite being an integral part of country, it was not treated well. “Since independence, this region, called the heaven on earth, has succumbed to some selfish politics, and yearned to lead a normal life. “The region was kept in the dark for a long time. Even after being an integral part of the country, Jammu and Kashmir was being discriminated against.”

In the same nation ‘two legislations” were functioning. Many welfare schemes of the Government of India, did not cross the border of Punjab,” he said, adding that after abrogation of Article 370, there was a new dawn of development in Jammu and Kashmir.Referring to the violence in J&K, he said, countless lives were lost, and countless houses were destroyed. “There is no account of how much blood was shed in the name of religion. “Many people have tried to link terrorism with religion. But are the victims of terrorism confined to any one religion?” Is the terrorist act done seeing whether there is a Hindu or a Muslim in front? Terrorists only know how to execute their plans by targeting India,” he said.“In order to ensure the safety of the public in this area, whenever any action has been taken by the army or state security forces against terrorists and their allies, some so called intellectuals of the country have found violation of human rights of terrorists in that action,” he said. “I am also surprised. That when our forces are attacked by the same terrorists, when the security forces are attacked, or the general public is attacked, and they are treated with ruthlessness, then where does the concern for human rights go,” he added.

Trailer of ‘Breathe: Into the Shadows’ S2 out