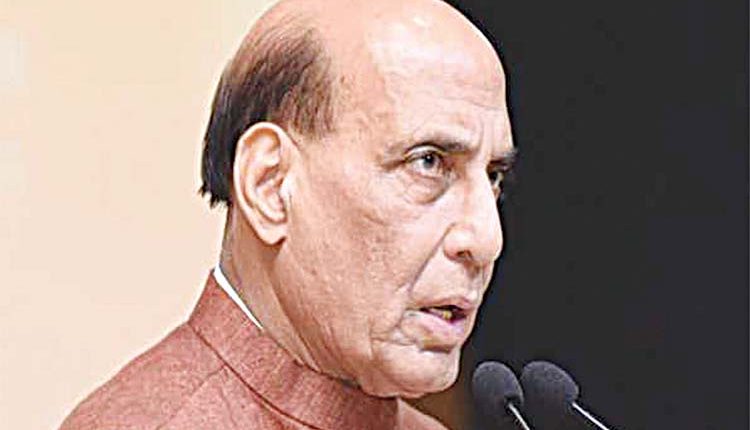 New Delhi, Oct 13 (FN Bureau) A political war of words erupted on Wednesday after Defence Minister Rajnath Singh said RSS ideologue Vinayak Damodar Savarkar was asked by Mahatma Gandhi to file a mercy petition with the British government, triggering sharp reactions from opposition leaders and experts who accused the minister of “distorting facts”. The Defence Minister, at an event to launch a book on the RSS ideologue, who is also known as ‘Veer Savarkar’, called him the first Indian strategic expert of the 20th Century and said that he has been discredited by people belonging to certain political ideologies. The Minister said that those with “Marxist-Leninist ideology” were the ones who discredited Savarkar. “Lies have been spread about Savarkar. It is said repeatedly that he filed mercy petitions with the British government, but the truth is that he did not file the petition on his own… He filed the mercy petition because Mahatma Gandhi told him. He had appealed that Savarkar should be released, he had said Savarkar would also participate in the freedom struggle like others in a non violent way,” Rajnath Singh said. A letter written to Savarkar by Gandhi in 1920 was shared by several political leaders who accused the defence minister of twisting facts.

According to letters which have been reproduced in a book – The Collected Works of Mahatma Gandhi, published by the Publications Division, Savarkar had written of Gandhi on January 18, 1920, saying the ‘Savarkar brothers’ had already spent ten years in jail. “It is now clear that the Indian Govt have decided not to release them. Please let me hear from you as to how to proceed in such circumstances,” the letter said. Gandhi in a reply on January 25, 1920, said, “I have your letter. It is difficult to advise you. I suggest, however, your framing a brief petition setting forth the facts of the case bringing out in clear relief the fact that the offence committed by your brother was purely political. “I suggest this in order that it would be possible to concentrate public attention on the case. Meanwhile, as I have said to you in an earlier letter. I am moving in the matter in my own way.” Congress leader Jairam Ramesh slammed the minister for twisting what Gandhi had said. “Rajnath Singh-ji is amongst the few sober & dignified voices in Modi Sarkar. But he doesn’t seem to be free of RSS habit of rewriting history. He has given a twist to what Gandhi actually wrote on Jan 25 1920,” he said in a tweet. Party leader Shashi Tharoor said Savarkar was lodged in the Cellular Jail on July 4, 1911. “Within six months, he submitted a petition for mercy. His second mercy petition was submitted on November 14, 1913. Gandhi Ji returned to India from South Africa on Jan 9, 1915,” Tharoor said. CPIM General Secretary Sitaram Yechury spoke on similar lines and said, “Such distortions cannot mislead. The fact is RSS was never part of the freedom struggle. Often collaborated with British.”

BJP leader Amit Malviya meanwhile tweeted a quotation on Savarkar which he quoted to Gandhi. “He is clever. He is brave, he is a patriot. The evil, in its hidden form of the present system of Government, he saw much earlier than I did. He is in the Andamans for having loved India too well. Under a just government he would be occupying a high post. – Gandhi on Savarkar,” Malviya said in a tweet. Chhattisgarh Chief Minister Bhupesh Baghel called the Minister’s statement “ridiculous”. “It is beyond comprehension how the two could have been in contact as Savarkar was locked up at the Cellular Jail (in Port Blair) and the Mahatma was in Wardha. Savarkar apologised not once but half-a-dozen times while behind bars. Subsequently, he sided with the English for years and worked on their agenda of divide and rule,” Baghel said. “The two-nation theory was first propounded by Savarkar in 1925 and he proposed Partition, which was later raised by the Muslim League in 1937. Thus, two organisations favouring communalism laid the foundation of Partition well before independence,” he said.

AIMIM leader Asaduddin Owaisi in a series of tweets slammed the minister and said, “In your speech yesterday, you mentioned that Savarkar defined Hindu as anyone for whom India was fatherland or motherland. However, Savarkar, as a man of limited intellectual prowess had actually defined Hindu as someone for whom India was fatherland AND holy Land.” “In his view, India was not the holy land for Muslims & Christians and so they couldn’t be fully loyal to India. What is your view on this as Defence Minister? Do you subscribe to this theory?” he questioned. Historian Irfan Habib meanwhile said the letter Gandhi wrote speaks about his generosity. “…He says about Savarkars, ‘they both state unequivocally that they do not desire independence from the British connection. On the contrary, they feel that India’s destiny can be best worked out in association with the British,” Habib said. Rajnath Singh, speaking at the launch of a book -“Veer Savarkar: The Man Who Could Have Prevented Partition”, authored by Uday Mahurkar and Chirayu Pandit on Tuesday had said that Savarkar’s contribution to India’s freedom struggle has been undermined, and called him a visionary and great freedom fighter. The Minister also talked about Savarkar’s idea of Hindutva, and said he considered all living to the south of the Sindhu river as Hindus. “Hating Veer Savarkar for his ideology is not right. Nationalism was supreme for him… It is a pragmatism which is a new currency of today’s world,” Singh said.