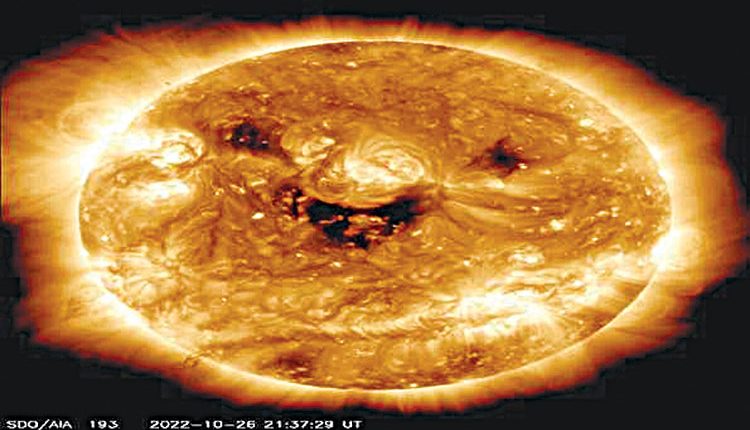 Washington, Oct 29 (Agency) A Nasa satellite captured an image of what appears to be a happy face pattern on the sun earlier this week, prompting the US space agency to say the sun was seen “smiling”.Despite its friendly look, experts warn that the sun’s coronal holes may mean a solar storm hitting earth on Saturday. The Guardian quoted Spaceweather.com as saying: “The cheerful mein is spewing a triple stream of solar wind toward Earth.” The space agency released the image Wednesday on Twitter, saying: “Today, Nasa’s Solar Dynamics Observatory caught the sun ‘smiling.’ Seen in ultraviolet light, these dark patches on the sun are known as coronal holes and are regions where fast solar wind gushes out into space.”

Since its release, Nasa’s photo has prompted a slew of responses online, with many comparing the image to a carved Halloween pumpkin, a lion and the sun featured in the children’s show Teletubbies. One user replied: “Is that the face of the Stay Puf[t] marshmallow man from Ghostbusters?” Another compared the sun to BN Mini chocolate biscuits that also feature smiling faces.Solar storms are a variety of eruptions of mass and energy from the solar surface that in turn deforms the earth’s magnetic field. Nasa’s Solar Dynamics Observatory is an agency mission aimed at investigating how solar activity is created and drives space weather.