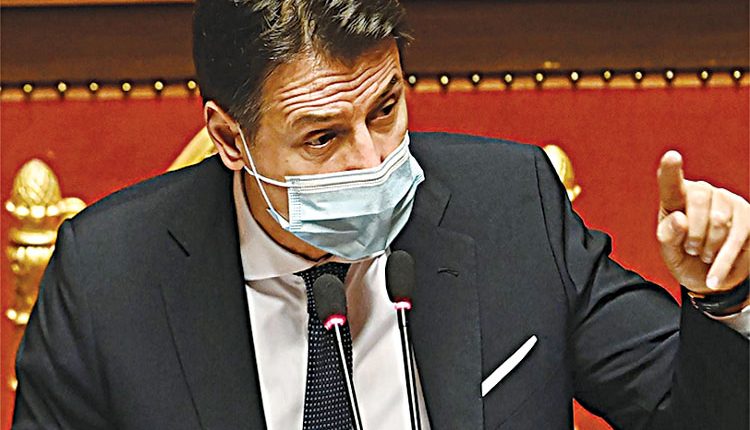 Rome, Jan 19 (Agency) Prime Minister Giuseppe Conte addressed the Italian Senate on Tuesday, hoping to win over enough opposition and unaligned lawmakers to keep him in office after a junior partner quit his coalition. Conte gave almost the same speech to the upper house as he had delivered on Monday to the Chamber of Deputies, where he won by a wider than expected margin of 321 votes to 259, securing an absolute majority. In the Senate, where the situation is much tighter, he added a comment about former premier Matteo Renzi’s frequent quarrels with his coalition partners before he walked out.

“I assure you it’s very hard to govern in these conditions, with people who continuously place mines in our path and try to undermine the political balance patiently reached by the coalition,” he said. Conte had only a slim majority in the 321-seat Senate even before Renzi withdrew his small centrist party Italia Viva from the government’s ranks last week. The result of the confidence vote, at the end of what promises to be a fiery debate, is due some time after 7 pm (1800 GMT). If the prime minister loses he will be forced to resign, putting an end to his 17-month government led by the anti-establishment 5-Star Movement and the centre-left Democratic Party (PD). The most optimistic recent tally by political analysts has put Conte on 157 votes, four short of an absolute majority, though Monday’s wider than expected victory margin in the Chamber of Deputies may buoy the premier’s hopes.