If BNP does excess, Khaleda Zia will be sent to jail again: Hasina 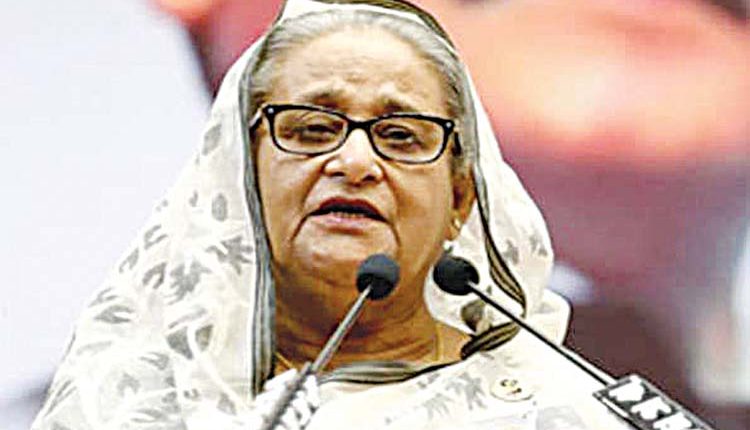 Dhaka, Nov 4 (Representative) Bangladesh Prime Minister and Awami League (AL) President Sheikh Hasina on Thursday sounded a note of warning that Khaleda Zia would be sent to jail again if the BNP goes superfluous in the name of anti-government movement. “If BNP does excess, Khaleda Zia will be sent to jail again,” she said while presiding over a discussion marking the Jail Killing Day organised by the Awami League at the Bangabandhu International Conference Centre (BICC) in capital Dhaka.Sheikh Hasina said the illegally formed political parties are now doing excesses in the name of movements. “We have said do your (BNP’s) meeting and procession peacefully, we will say nothing. We will not tolerate anymore, if anyone is hurt and showing audacity by bringing (bamboo) sticks (in the rallies),” she warned. The Prime Minister said Khaleda Zia has been sentenced to 10 years in the Zia Orphanage Trust and seven years for the Zia Charitable Trust corruption cases which were filed by the caretaker government and is now staying in her house as the government on humanitarian ground allowed it after halting her sentences.“But, what is their (BNP’s) condition today. They have to rescue democracy. The party, which was created from the pocket of a military dictator, who assumed power illegally, my question is how the party would rescue democracy,” she said. The Premier termed BNP as an illegal party as it was created by a military dictator Ziaur Rahman’s government as the High Court declared the government as illegal as he assumed power after violating the country’s constitution. “BNP is an illegal party as it was formed by an illegal government,” she said, adding that the apex court also declared another military Ershad’s government as illegal. The Prime Minister came down heavily on some people who are now echoing the voice of BNP, “My question is that where are their knowledge. Do they understand the reality?”

Sheikh Hasina also criticised some people who demanded them as intellectuals and described military dictator Ziaur Rahman as the founder of democracy. The Prime Minister asked the so-called intellectuals how Zia could give democracy as he took power illegally and at the same time declared him as the country’s president and army chief after breaching the country’s laws and constitution and killing hundreds of armed forces officials in the name of military trials.General Secretary of the AL and Road Transport and Bridges Minister Obaidul Quader , MP, gave the address of welcome. AL Presidium Members, Sheikh Fazlul Karim Selim, MP, Engineer Mosharraf Hossain, MP, and Mofazzel Hossain Chowdhury Maya, Bir Bikram, executive committee member, Parvin Zaman Kalpana, daughter of martyred Syed Nazrul Islam, Dr Syeda Zakia Noor Lipi, MP, Dhaka South and North City AL Presidents, Abu Ahmed Monnafi and Sheikh Bazlur Rahman, also spoke. AL Publicity and Publication Secretary Dr Abdus Sobhan Golap, MP, and his deputy Aminul Islam moderated the discussion.At the outset of the discussion, a one minute silence was observed as a mark of respect to the martyrs of the August 15 and November 3 of 1975 massacres.On this day in 1975, the killers of Bangabandhu stormed into the Dhaka Central Jail in the early hours and assassinated the four national leaders – Tajuddin Ahmed, Syed Nazrul Islam, Captain Monsur Ali and AHM Kamaruzzaman – who led the Liberation War in the absence of Bangabandhu in 1971 and snatched the victory for the nation. The Day’s programme started with placing floral wreaths at the portrait of Father of the Nation Bangabandhu in front of Bangabandhu Memorial Museum at Dhanmondi Road No 32 and martyrs of the August 15 and November 3 of 1975 at Banani Graveyard here this morning.