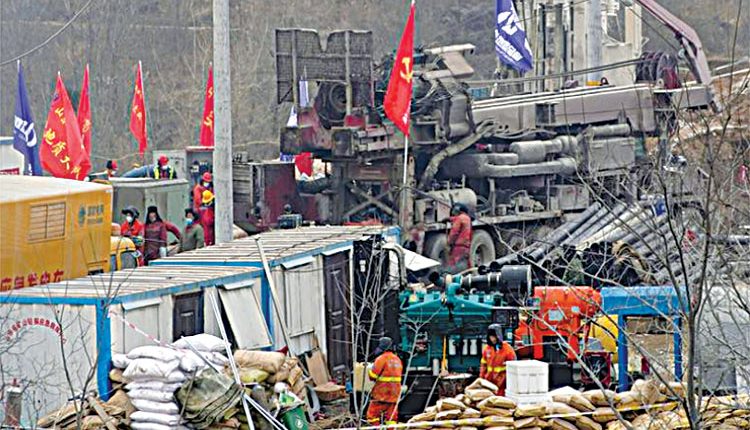 Beijing, Jan 24 (Agency) Chinese rescuers pulled 11 gold miners to safety on Sunday with most of them in good condition after 14 days trapped underground after an explosion, but 10 colleagues were still unaccounted for, state media reported. Over the next few hours, 10 miners from a different section of the mine, who had been getting food and medical supplies down a shaft from rescue workers last week, were brought out in batches. The Jan. 10 explosion in the Hushan mine in Qixia, a major gold-producing region under the administration of Yantai in coastal Shandong province, trapped 22 workers about 600 metres (2,000 feet) underground. One miner is known to have died.

Ten are unaccounted for. More than 600 rescuers have been on the site working to reach the men. The workers’ escape is similar to the rescue of 33 miners trapped in the San Jose copper-gold mine in Chile for more than 69 days in 2010. The Chilean miners, who were caught in a cave-in, survived on rations of food and water for 17 days until rescue crews gave them a lifeline by drilling a tiny hole into the chamber where they had taken refuge.

Eleventh National Voters’ Day to be celebrated on Jan 25