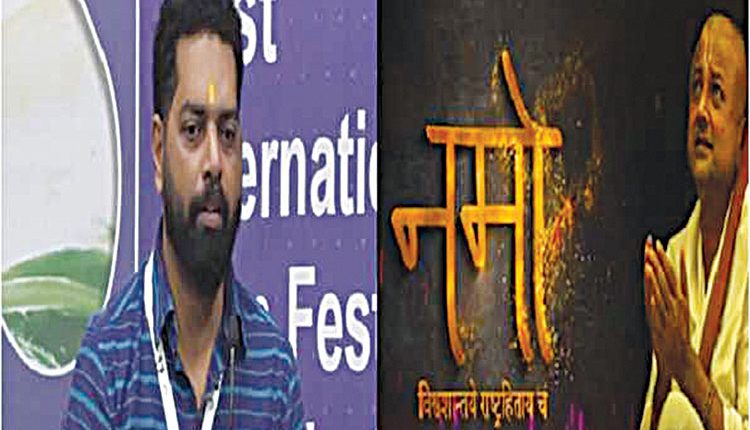 Panaji, Jan 24 (FN Agency) Vijeesh Mani, director of “Namo”, has said that the film shows how a ruler and a citizen should be. Addressing a press conference, he said,’The film shows us how a ruler and a citizen should be. The plot of ‘Namo’ begins in the present, and goes on to connect us back to the relationship between Krishna and Sudhama.’ ‘The Krishna-Kuchela story is often told to illustrate that God does not differentiate between people based on their financial status. He always rewards real devotion. As per the Bhagavata Purana, Lord Sri Krishna studied at the Ashramam of Guru Sandipan along with Kuchela (Sudama), a poor Brahmin boy. Very soon, both become close friends, but part ways after completing their studies. Later Sri Krishna ruled the Kingdom of Dwaraka, while his true friend Kuchela remained poor, earning his bread by singing Sree Krishna bhajans.’

The 102-minute 2019 film, which promotes the rich tradition of the Sanskrit language and takes audineces back to the age-old Krishna-Kulecha story, was screened at ongoing 51st International Film Festival of India (IFFI). Mr Mani said,’Sanskrit is a rich language but I found it has not been receiving much attention. Hence, I wanted to make a movie in the Sanskrit language.” The director pointed out that the Namo crew had a wide range of artists hailing from different parts of the country. “Padma Shri Anoop Jalota gave the music, B Lenin Sir edited it and cinematographer Loganathan captured it,” Mr Mani said. He said it was his directorial aspiration to try out different genres of films. “I always wanted to direct films of different genres. My first film Vishwaguru (Malayalam) – was completed in 51 hours, all the way from script to screening. The film was recorded in Guinness World Records as the fastest produced film. It was also released in theatres,” he said. Mr Mani informed how he was able to retain the autonomy in the choice of his preferred genres. “I myself produce all my films. This gives me the freedom to decide the genre independently. I am on my own and hence I can do many experiments with film making,” he said. The director has made films in tribal languages too. His film ‘Netaji’ is the first film to have been made in ‘Irula’, a Dravidian language spoken by inhabitants of Nilgiri Hills.

This film entered Guinness Records for being the first film in this tribal language. The film was also screened last year in 2019 during the 50th IFFI in Goa. His other films include Puzhayamma (Malayalam), which has been shot completely in a river, and Mmmmm (Kurumba – a least popular tribal language). Puzhayamma is an environmental awareness film which got a place in Asian Book of Records. Vijeesh Mani is also an Organic farmer and an active member of Swachh Bharat Mission. He holds a Doctorate from Kings University, Hawaii.