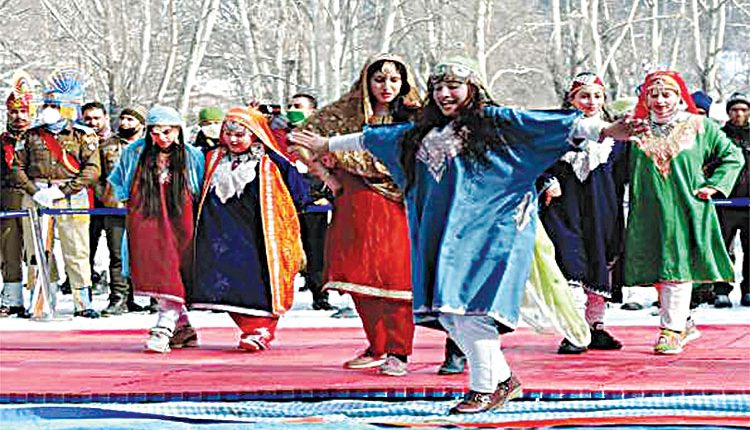 Srinagar, Jan 24 (FN Representative) Despite snow and chilly weather conditions, full dress rehearsals for the Republic Day (RD) celebrations were held in summer capital, Srinagar, and elsewhere in the Kashmir valley on Sunday amid unprecedented security arrangements. The main rehearsal was held at S K Cricket Stadium in high security Sonawar area of the city, where Divisional Commissioner, Kashmir, P K Pole unfurled the National flag and took salute at the march past and witnessed cultural programme. Central Paramilitary Force, police, Fire and Emergency Service (F&ES) and Home guard contingents participated in the march-past despite snow and chilly weather conditions.

However, snow was cleared from the march-past track. This was followed by cultural programme presented by different groups. A cultural programme was also presented by CRPF personnel. All roads leading to the venue of the R-Day celebrations were closed for any traffic movement since Saturday evening. The main Residency road to stadium was closed at Polo-view since early this morning. Similarly, road to venue of the rehearsal was closed at Sonawar crossing and vehicles were directed to take alternative route.

Closure of the Residency road has affected weekly Sunday Market in the area as vendors have been directed not to put up their stalls today. A large number of security forces and police personnel were deployed to prevent any attempt to disrupt the celebrations. Reports of full dress rehearsal celebrations were also received from other district headquarters in the valley, where Deputy Commissioners, hoisted the national flag and took salute at the march past despite snow and chill. An official said a full dress rehearsal parade for Republic Day was held at Khushal Sports Stadium Sopore in north Kashmir district of Baramulla. “A full dress rehearsal parade was held at Distict Police Line Awantipora in north Kashmir distict of Pulwama,” he said. He said despite chilly weather conditions, a full dress rehearsal for the Republic Day was held at District Police Line (DPL) Kupwara.

‘Pledge for free and fair election this Republic Day’