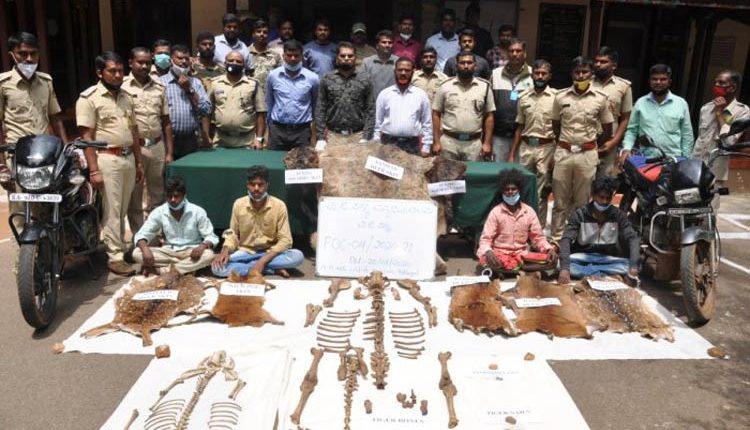 Bengaluru, Nov 29 (Agency) Chennammanakere Achukattu police have arrested four people, including a woman, for attempting to sell the claws and skin of wild animals in Kathriguppe. Police said on Sunday that the arrested have been identified as Karthik Kumar (40) and V Prashanth (28), both hailed from Nellur in Hunsur of Mysuru and Pramila (40) and her son Sai Kumar (22) natives of Chittoor in Andhra Pradesh. Based on the information they received , officials went to the footpath near 43 A BMTC bus stop and found four people trying to sell the skin and claws of wild animals kept in school bags on Saturday evening. During interrogation, the suspects said they belong to the ‘Hakki Pikki’ tribe and are only sellers.

They also said a gang hunts for the animals in the Karnataka and Andhra forests. Police have taken up a case under the Wildlife Protection Act and are making efforts to nab the associates of their associates. They have also alerted the forest officials concerned. They seized 400 leopard claws, six tiger claws, skin of a Black Buck, jackal skin with a head, seven Pangolin scales, two jungle cat paws, three sloth bear claws, three bear claws and four mobile phones. The arrested people confirmed that their associates killed animals in Nagarahole and other forest areas. They admitted to having come to the city a couple of times to sell the claws and skin of wild animals.