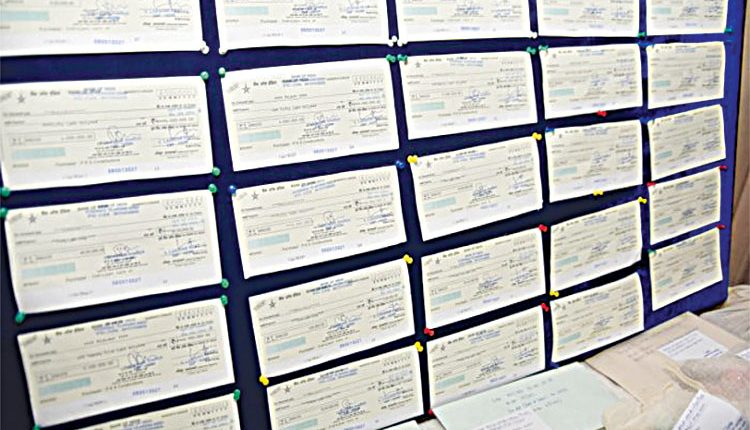 Bengaluru, Feb 11(Agency) Begur police busted a gang that had indulged in making fake Demand Drafts of various Banks and have arrested a couple, a dismissed prison department employee and another person. Police have seized 25 fake DDs worth about Rs 7.18 crore from the gang comprising S R Indrajith Nayak (34), his wife Manjula (34), Muniraj (48) and C Ananda (25), all residents of Begur and the surrounding areas.

The gang created fake DDs and wanted to encash them for a discount with DD and cheque discount agents, jewellers and pawnbrokers. Muniraj, a Second Division Assistant (SDA) in the Prison Department, was dismissed a few years ago on corruption charges. Muniraj designed the plan to make fake DDs with an idea of making quick money and shared it with the Nayak couple and Anand. He obtained an original DD for Rs 300 and passed it over to the couple to make fake DDs with the available details.

Nayak and Manjula prepared a fake DD for Rs 4.5 lakh in the name of a real-estate firm and presented it to pawnbroker Jayaraj asking him to give Rs 1.5 lakh. Jayaraj obliged by paying them Rs 1.5 lakh and presented the DD in the bank, where he was told that it was fake. He filed a cheating complaint against the couple in Begur police. Police inspector S S Manju and his team nabbed Nayak first and others later. They seized around Rs 9,000 in cash, a printer, 25 fake DDs, a laptop, a rubber stamp and seals used to create fake DDs. Police said Nayak was jailed on several occasions in a few criminal cases. He had also attempted to dispose of counterfeit notes in the past.